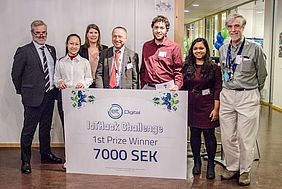 Team Gym Note is the winner of the IOT Hack Challenge of EIT Digital High Impact Initiative ACTIVE, with their smart gym equipment/workout machine automatically registering and storing training set, and allowing users to view training history and potentially suggest workout routines on a mobile application. The team was awarded a prize of 7,000 SEK.

"The IoT Hack Challenge has overall helped the ACTIVE High Impact Initiative to get use cases to validate the platform and also to get a clearer view of what kind of problems were faced by users of the platform and how it could be improved in order to emerge as a successful product in the future", says Matti Frisk, the leader of HII ACTIVE.

The IoT Hack Challenge Finals were conducted as part of EIT Digital Sweden Innovation Day. The Challenge was kicked-off earlier in October when the ACTIVE IoT connectivity platform was first launched for people to try and use in their applications.

During the first phase of the Challenge, six teams participated with their innovative ideas on using the ACTIVE platform out of which three teams were selected for the finals. After a gruelling six weeks of hard work, the three teams managed to build their applications using the ACTIVE platform and also to give short demos during their presentations.

"It was very commendable on part of all the teams to have built actual working prototypes of their products and also be able to pitch their idea within just six weeks", EIT Digital Stockholm Node director Göran Olofsson credits the finalists.

In addition to Göran Olofsson, the IoT Challenge Finals jury members included Henrik Abrahmowicz (Digital Infrastructure Action Line Leader), Karoline Beronius (Entrepreneur & CEO of MapProject) and Mark Smith (Professor at the Department of Electronic Systems, KTH), who were all very impressed by the quality of presentations all the three teams had.