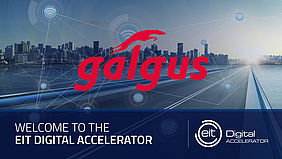 Increasing WiFi performance by up to 400%

The Cognitive Hotspot™ Technology (CHT) creates a fully distributed Wi-Fi network, making each access point intelligent. Access points with CHT measure key network metrics, exchange them with neighbouring access points and together optimise radio resources in real-time, while reducing interference levels and power consumption. As a result, the WiFi performance increases by up to 400%. Furthermore, it reduces the number of access points needed in WiFi deployments and thus costs. CHT is a fully distributed technology which needs no central controller.

Founded in 2013 in Spain, Galgus has developed and patented CHT (Cognitive Hotspot™ Technology), a multiplatform software that may be installed on a wide range of wireless access points and routers.

More information you will find on theirWebsite, onTwitter and Youtube.

EIT Digital Accelerator provides tailor-made growth support for European tech scaleups by helping secure international customers and raise capital. The Accelerator team comprises around 30 experienced business developers and finance experts operating from 15 cities across Europe, along with a hub in Silicon Valley. Since 2012, they have supported 300 startups who raised over €450 million in investment, with more than €100 million directly facilitated by the Accelerator. The programme was ranked 8th among the Top 20 Active Accelerators in the Global Accelerator Report 2016 by Gust.

Interested to learn more about the growth services of the EIT Digital Accelerator? Get in touch!