The third HealthSPA focused on the US market 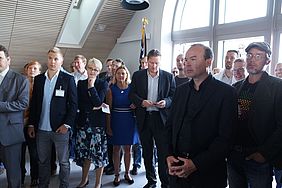 The third HealthSPA was held on the 28th of August overlooking the beautiful Helsinki archipelago from the brand new Innovation Center at the US Embassy. HealthSPA is a networking event for the health cluster in Finland.  The visit to the embassy was followed by a networking cruise around the archipelago of Helsinki. The evening became a true spa for mind and spirit.

The US Ambassador Bruce Oreck greeted the group of 70 people confirming American's obsession with health. Too fat or too fit, he felt that the market is ripe. He urged the HealtSPA community to leverage the embassy and its innovation center as a hub for conversation.

The audience heard short keynotes. HeiaHeia founder Jussi Räisänen said that sales to US can be done remotely in these digital days, by not highlighting the physical distance between parties - in the Internet we are all a click away. Jouni Lounasmaa of Traxmeet shared their lessons and urged members to form partnership for early go to market success. Nelli Lähdesmäki of HealthPuzzle stressed the crucial need for networking serendipity and urged anyone going to the Silicon Valley to always add an extra week and leave it open for chance. Mike Klyszeiko from the American Chamber of Commerce, with roots in Silicon Valley promoted the networks ability to form bonds.

Next steps for the health cluster

The HealthSPA organizers, Christian Lindholm of Koru and Marko Turpeinen, Director EIT ICT Labs Helsinki, announced that HealthSPA will drive the Health & Wellness stream at Slush, northern Europe's biggest start-up conference, thus creating a platform for start-ups and investors to meet. This will create a massive boost for the community. The Health & Wellbeing stream is supported by the Finnish innovation fund Sitra and EIT ICT Labs.

In October  2013 EIT ICT Labs and Tekes, the Finnish funding agency for technology and innovation, will bring tens of Finnish health and wellbeing start-ups to the USA to be part of the Health 2.0 conference.