Looking into your own DNA 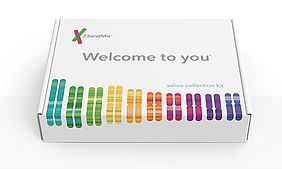 A genetic testing kit has been approved by the FDA for market distribution. Credit: 23andMe

Progress in DNA sequencing has made possible to get your DNA sequence in just a few days at a cost that is now under 1,000$. Still expensive but nothing if you compare to the cost of just few years ago. And speed of sequencing and cost of sequencing will continue to get better: early next decade we can expect sequencing to happen in just a day at a cost around 100$. That will turn DNA sequencing in a "normal" medical procedure, actually in one of the less expensive ones.

Sequencing is now performed through massively parallel computation and one reason for the decrease in cost is the decreased cost of computation. Your DNA sample (usually taken from a saliva spec) is multiplied several times and each resulting copy is slip into many many fragments that are entered into a pipeline consisting of 96 streams for processing the sequences.

This generates a huge amount of data (depending on the specific approach followed it may result in as much as 7TB of data). These data need to be analysed to reassemble the correct DNA sequence. It is a bit like taking and image and chopping it into small pieces, a puzzle, that need to be reassembled to recreate the original image. The DNA string, as a sequence of the four bases (Adenosine, Cytosine, Guanine and Thymine), does not require a huge space for storing. It is made up of a few billion pairs and therefore a few GB of space are enough to store it. Actually, out DNA is by far the same to the one of any other person, so one could use as default a "standard DNA" as reference and store just the differences of my DNA from the "standard DNA". Even better! One could use several standard DNA (e.g. one from "Caucasian man" another for "American Indian man") and store the differences of my DNA from the one that is most closely related to mine. With this approach one could reduce the storage needed for my DNA to a few hundred MB.

In several cases, like checking for a genetic variant that may lead to an increased risk of getting a specific pathology, like Parkinson disease, celiac disease,... one can focus on just a part of the DNA (on a few genes) and this cuts down further the sequencing time and the cost of sequencing.

In this case simplified approach to sequencing are available, to the point that sequencing can be done using specific kits.
The FDA has approved the use of some of these kits marketed by 23andMe. This is important since it signals a shift from leading edge (and costly) procedure to a mass market procedure. Furthermore, this is bound to further decrease price and make the genome sequencing and analyses fall in the ballpark of usual medical exams, like blood exams.

It is a shift that a few foresaw in the last decade when the first genomes were sequenced to occur by the end of this decade, and, indeed, here we are!

My personal bet is that within the next decade the sequencing of the genome will be performed as a standard procedure at birth and the sequence will become part of our clinical record. The opening of these clinical records, although fraught with privacy concerns, will enable a tremendous growth in knowledge and boost a completely new business generating many jobs and improving the wellbeing of humanity over the longer term (I would expect the full impact to take place in twenty years).