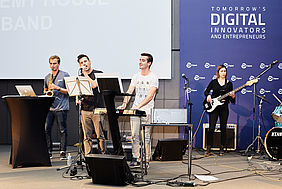 The band aims to gather all kinds of musicians from the EIT Digital Academy schools so that an ensemble of locally-based musicians can play at various EIT Digital events. 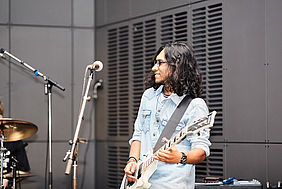 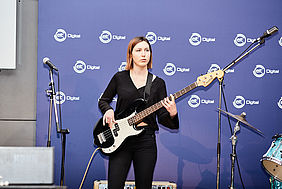 The band members are second years students of the EIT Digital Master School, a European network of top technical universities that has been offering technical master school programmes and a business minor in innovation and entrepreneurship since 2012. Already at the Kick-Off, students start learning how to translate technology into business.

The band aims to gather all kinds of musicians from the EIT Digital Academy schools so that an ensemble of locally-based musicians can play at various EIT Digital events. Its repertoire is very diverse, encompassing everything from heavy metal to seventies disco, rock to hip-hop and pop to dance. So far, the band mainly plays cover songs. To energise the audience on the first day of the Kick-Off, the band will open with a heavy metal cover followed by its own song with EIT Digital lyrics based on the song TNT from AC/DC.

Kazi Injamamyl Haque (26), who studies Digital Media Technology at the Delft University of Technology and the University of Trento, is one of the band musicians. Before entering the EIT Digital Master School he was - and still is - a lead guitarist of the Bangladeshi band Minerva which has recently recorded its second heavy/ thrash metal album and performed hundreds of live concerts between 2011 and 2017. "I am really excited to be in the EIT Digital Academy House Band, because music is a language that everyone understands. Music is what helps people to connect with each other and EIT Digital is all about making connection."

The other band members are: Fillippo Sterrantino, a student of Human Computer Interaction & Design (HCID) at KTH in Stockholm and University Paris-Sud in Paris; Dániel Bányay, a student of Digital Media Technology at Delft University of Technology and KTH; Thilo Wobker, who studies Internet Technology and Architecture (ITA) at KTH and at TU Berlin; Roosa Kallionpa also a HCID student but then at the University Paris-Sud Paris and at KTH; Philip Claesson, student Data Scientist at Politecnico di Milano and KTH; and Fernando Pedraza Nieto, student at KTH and the University of Trento.

At the moment, the EIT Digital Academy Band consists of seven members, but that may grow over time. At the yearly Kick-Off that is held at EIT Digital Academy partner Sorbonne University, the new cohort of students will be able to take part in live auditions during jam sessions. The musicians have also started a closed musician group on EIT Digital Academy's Facebook page. Music-playing students or alumni interested in participating in the band can join. Kazi: "I hope that there will be a musician community within the EIT Digital community in which people can share their talent with each other with the possibility of being invited to play at EIT Digital events. Because, what is an event if there is no live music?"

The idea for the EIT Digital Academy House Band came from business coach Ákos Wetters, who will lead the business challenge at the Kick-Off, and EIT Digital Academy communication manager Karin Oost while they were brainstorming on a train about the opening of the Kick-Off. According to Wetters: "One thing led to the other. During the Summer School, I met Kazi who in Bangladesh is a famous band lead. So I asked him and he was enthusiastic as well so we started to recruit other band members." Oost said: "At the Academy we bring together the international technology talent that Europe needs to command a leading role in the digital economy. One of the pillars of our success is that we enable students to build their own pan-European network for life. The Kick-Off is a perfect way to establish that network and music, as everybody knows, brings people together. It can contribute to creating long-lasting friendships and business relationships."