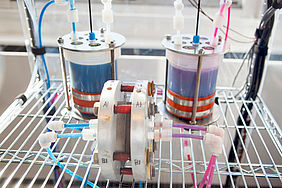 I had to catch your eye... Unless you are a fan of chemistry it is unlikely that you are fluent in ... quinones. They are organic compounds and if you really want to know more about them click on the link for a Wikepedia article. Although the name might feel strange these compounds are very common, you'll find them in plants and in other living beings, us included.

I run onto the quinones by reading a news published by Hardvard School of Engineering and Applied Sciences, where researchers have been using them for developing a mega flow organic battery promising a breakthrough in renewable energy.

One of the problem with renewable energy is that their source is not constant: windmills are good as long a the wind blows, sunlight is ok during the day (provided it is not too clouded) and so on. What is needed is a good energy storage system that can accumulate electrical power as it is produced and release it once needed.

Batteries have been invented just for that. But batteries are expensive and one thing is to store a few KW hours, a completely different one is to store MW hours. And the latter is what is really needed if you are looking for an energy buffer to compensate for the uneven production of electrical power by renewable.

The team at Harvard have come up with a flow battery based on quinones. Flow batteries are not new but so far they have been based on expensive components, like vanadium an platinum. The innovation here is the use of quinones, much cheaper, in a way that yields the same storage capacity. In a battery you are looking at several factors, like the speed of re-charge, the power output, the capacity and the number of cycles through which the battery maintains the same efficiency in the above parameters.

The experiments so far indicate a good efficiency for several hundred cycles, too little for commercial application. The researchers are now working on that.

Flow battery capacity depends on the volume of the liquid used to store the electrical power. A horse trailer sized box could store the energy produced during the day by a photovoltaic system on the roof of a building and release it during the night. It is big, but actually not that big if compared to the building size, perfectly in line with the dimension of infrastructure equipment.

It is interesting to see evolution in the direction of lower and lower cost. This is what brings the innovation to the market, created volumes and in turns leads to lower cost in a virtuous spiral.

We can bet that over the next decade we will see more and more micro power generators flanked by micro power storage buffers. They will change completely the energy distribution scenario and this is likely to go hand in hand with new smart devices, with sensors and with ambient awareness. And beneath all of this you have, you need ICT. Something that is being worked on in the Smart Energy Action Line of the EIT ICT LABS.

In this area, as in several others progress happens through a variety of tiny technological pushes but to change the world you need to be able to take the bigger picture and integrate those technological advances in a system wide approach where market and regulation along with huge infrastructural investment are making the difference. Curiously, we tend to perceive the single technological advances, like this one on using quinones, whilst we miss the slow but huge change of the whole ecosystem. In reality one fosters the other.