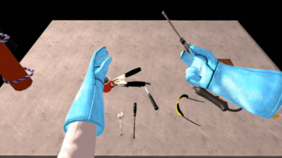 EIT Digital is launching an Innovation Activity* to develop a virtual reality (VR) training tool to help improve safety, reduce downtime and save costs for European industries. Dubbed the "Handcode project," the work is to be carried out by two EIT Digital partners in Sweden – RISE SICS Västerås and Gleechi alongside The French Alternative Energies and Atomic Energy Commission (CEA) in France.

"VR can really provide a range of benefits to industrial training applications. A virtual environment can be designed to create a scenario that could not be performed in a real situation due to factors like costs and risk. The scenarios in three-dimensional environments enable training without risk to the trainee and at minimum expense", says Stig Larsson, Senior Researcher, Deputy Manager RISE SICS Västerås and the EIT Digital Activity Lead for the Handcode project.

At the heart of the project is the ‘Virtual Grasp’ technology provided by EIT Digital partner Gleechi. This solution was borne from the understanding that the most common physical action that people use for interacting with the world is grasping objects with their hands. Traditionally this has not been easy to translate into a simulated environment where virtual hands have typically been rigid or their movements pre-defined. The Virtual Grasp changes the parameters by animating hands that can move and interact freely and realistically.

"Until now VR has mostly been focused on games but we see a huge potential in solving problems in the manufacturing industry by enabling safe, relevant and cost efficient training for staff to practice operating machinery. For this to work the machines need to be as easy and natural to interact with as in real life. This is the first software in the world to enable natural hand interaction and by combining our innovation with the brilliant expertise from both RISE SICS Västerås and The French Alternative Energies and Atomic Energy Commission (CEA) we believe that we can produce a solution that could be a game-changer for training staff across a range of industries."

The Innovation Activity will initially focus on providing a standardised platform that minimises the need for customisation for each customer case. The platform will handle standard ways of interaction for training, such as using regular tools, pulling levers and pushing buttons. Pilots with manufacturing companies are planned for later this year before a commercial roll-out in early 2018.

Gleechi is a Swedish scale-up formed following eight years of robotics research at KTH. It won the ICT startup course by EIT Digital and Swedish partner STING in 2012. A few years later, in 2015, they won the Cyber-Physical Systems category of the European-wide EIT Digital Challenge and joined the EIT Digital Accelerator programme. In late 2016 Gleechi joined EIT Digital Sweden as a partner where it benefits from the mix of academic institutions, large ICT enterprises and SMEs that form the innovation community of EIT Digital.