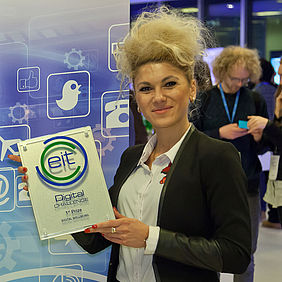 EIT Digital is delighted to announce that Kristina Tsvetanova CEO of BLITAB Technology and winner of the Digital Wellbeing category of the 2016 EIT Digital Challenge, has won the Rising Innovator category of the European Commission's annual Prize for Women Innovators.

Kristina is the co-inventor of the award-winning innovation BLITAB® - the first tactile tablet for blind and visually impaired people. The technology creates tactile braille and graphics by using smart micro fluids to develop small physical bubbles instead of a screen display. The revolutionary device promises to improve the social wellbeing and digital inclusion of people who may have had difficulty accessing the digital world until now.

Kristina recently successfully showcased her innovative tablet at CES in Las Vegas where it was cited by the BBC as one of the show's biggest launches.

Blitab was also named the World's Most Creative Startup in 2015 and was also European Winner of the Social Entrepreneurship and Disability category.