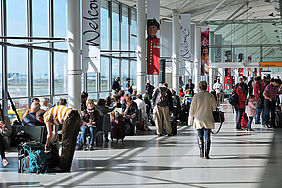 In airports, it could be used to improve passengers’ experience, avoiding long queues, and increase the revenue of duty-free commercial areas. 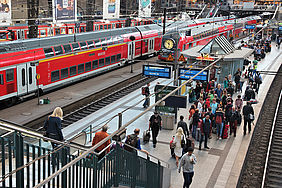 It was incorporated quite recently, on 25 March 2019. Yet, Ariadne Maps, a startup born out of EIT Digital’s “People Movement Analysis and Optimisation of Infrastructure” Innovation Activity is growing pretty fast. Earning remarkable achievements in the process.

At the end of June, it signed a deal with Deutsche Bahn, the German railway company considered to be the largest railway operator and infrastructure owner in Europe.

Deutsche Bahn is eager to use Ariadne Maps’ indoor localisation technology, which uses smartphone generated signals on various frequencies (GPS, Wi-Fi, GSM, Bluetooth and others) to anonymously analyse people movements, with an accuracy rating that is up to two orders of magnitude greater than GPS.

The technology includes both a hardware component, the receivers that have to be installed in key points to get the signals, and a software platform.

“Smartphones are never silent; unless they are totally switched off, they are always sending signals on different frequencies, even if they are in airplane mode. We capture these signals with our devices, which we install at the platforms, we triangulate them and analyse peoples movements,” the startup’s CEO and co-founder Georgios Pipelidis says.

This will help the German railway company solve a longstanding issue that affects stations located at German borders: how to differentiate between passengers who are continuing their journey, or staying in town.

This is valuable data, given that, when a single ticket is used by a commuting passenger, revenue sharing between railway companies of different nations (or between different companies of the same nation), depends on being able to identify and track a traveller’s journey.

So far, the only way for Deutsche Bahn to have access to this information, was doing periodical surveys and interviews, a method with several limitations and implemented only once every five years.

“Right now, we are installing our devices in one railway station. When this initial small-scale testing phase is over, Deutsche Bahn is committed to adopting our technology in 75 other stations and then possibly across their entire network,” Ariadne’s CTO and Co-Founder Nikos Tsiamitros says.

This deal alone could be reason enough to rejoice, but the Ariadne Maps team has a lot more on its plate.

Ariadne’s technology, for instance, has been put to work at the well-known IEE Pervasive Computing and Communications Conference, to monitor how people moved from workshop to workshop and has raised the attention of university researchers, that want to use it to monitor the social interactions of staff of the Concordia Research Station in Antarctica.

“We will use smart watches, to monitor the staffs’ location, to see which rooms are used the most, who interacts the most with whom, it’s a social study: its goal is to simulate situations of space exploration, since during the winter, there are only 8 people living at the station. Just like the International Space Station, where 6 people are living,” the CEO explains.

What’s more, their technology, which has already been recognised as one of the best on the market, was among the best three solutions at the IEEE IPIN 2018 conference, opening entirely new scenarios for businesses operating in high-density people environments like train stations, exhibitions centers, malls, airports, museums.

For owners of large shopping centres, for instance, it could be instrumental in seeing how customers are moving, which shops they are visiting, which products they see.

In airports, it could be used to improve passengers’ experience, avoiding long queues, and increase the revenue of duty-free commercial areas. Passenger traffic is rapidly growing (it could double to 8.2 billion customers in 2037) and it won’t always be easy for airport companies to cope with the increase.

The startup has already begun collaborating with Ferrovial, the company which (among other things) manages Heathrow airport, to help it understand and optimise the flow of people inside its buildings.

”What they want to find out is the wait time: how much time it takes a passenger from the moment they enter the airport, to reach the gate; right now, there is no way of knowing this. Our method can generate detailed analytics, which can be used to mine patterns, such as identification of bottlenecks and hence act as a guide to reducing congestion,” Pipelidis says.

Ariadne Maps belongs to EIT Digital’s Digital Tech focus area and is one of the best examples of how the innovation activities supported by the organisation can quickly have an impact and scale.