Over 120 participants including great startups had gathered for the EIT Digital Grand Opening of its new hub in Silicon Valley.

The day contained presentations, interactive workshops, official opening and much appreciated pitches by 12 European startups in the field of Health & Wellbeing.

"I really enjoyed our opening event with a very strong program and very high show-up of audience both in terms of numbers and seniority. The message to connect in a more uniform way from Europe to the Bay Area was well received and reinforced by the words from the Italian Consul General Mauro Battocchi. All in all an excellent start where we did set the expectations right and high; we are all set-up now to make the hub a real bridge between the Bay Area and our EU ecosystem”, said Willem Jonker CEO EIT Digital. 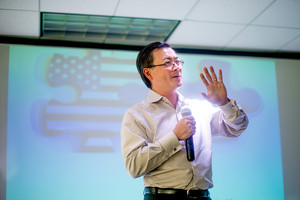 The first Keynote: "Hiding in Plain Sight - Massive Trends Missed by the Masses”, was given by Dr. Joon Yun, a renowned investor and Managing Partner and President of Palo Alto Investors, LLC, a hedge fund founded in 1989 with over $1 billion in assets under management. The audience was captured by his talk on e.g. ageing and the ability to remain stable or remaining the same.

"When we are young for instance we can rebound from a bad night’s sleep quickly, when we are old, it can take days to recover. When we are young, our eyes adjust to changing focal length, when we are old, the focus never quite rebalances. The original “health system” is our inborn, adaptive homeostatic capacity, endowed by nature and shaped by evolution. Once humans reach reproductive senescence by their mid 40s, however, a progressive erosion of innate homeostatic capacity begins, manifesting in the panoply of aging diseases. Our proposal for 21st century healthcare is a paradigmatic revolution—restoring homeostatic capacity instead of restoring homeostasis—as a way to end aging. If we can put homeostatic capacity, and thus health, back in the body, healthcare costs could contract dramatically. The feed-forward relationship between health innovation and increasing future consumption—a vicious cycle that threatens aging economies everywhere including Europe and the United States—would finally be decoupled. Median lifespan could telescope to a number of years that might have once seemed unimaginable. Human capacity would finally be fully unleashed", explained Joon Yan.​