Undagrid is finalist at the 4YFN Awards 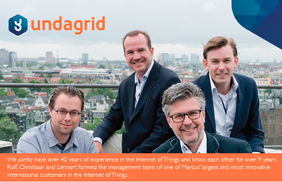 As finalist of the 4YFN - 4 Years from Now - Awards, Idea Challenge winner Undagrid will pitch at the GSMA Mobile World Congress in Barcelona 2-4 march 2015.

Undagrid has been selected best Internet of Things Startup of Europe and has been chosen as Startup of the Year 2014 in the Netherlands thanks to their disruptive Internet of Things technology. It’s already used to solve a worldwide problem in aviation, the localisation of non-motorized Ground Support Equipment at airports which is already live at Amsterdam Airport Schiphol.