Undagrid becomes Startup of the Year in the Netherlands 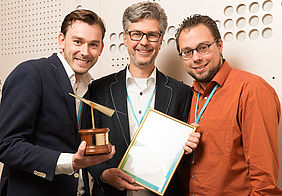 Congratulations to Undagrid, first prize-winner of Idea Challenge in the category Internet of Things for winning Sprout’s startup of the year competition.

Twelve Dutch startups were shortlisted. The online community could vote for their favorite four teams - among them Undagrid! On January 15th, the four finalists had to pitch to convince a jury of entrepreneurs and investors at Amsterdam’s new startup hub, B.Amsterdam. In the end Undagrid went home with the title: Startup of the Year 2014.

But this is no reason for Undagrid to rest on its success. Undagrid is preparing for its next production since there is a great interest in the GSETrack solution by airports all around the world.