Transforming any ambient surface into a screen 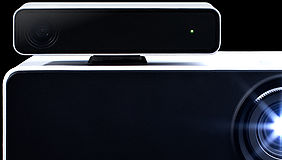 A special camera coupled to a projector can sense the various shape in an ambient and a computer use that information to transform any surface of that ambient into a screen. Credit: Lightform

Lightform, a California based start up, is planning to release this Summer (for those living in the North hemisphere...) an amazing device that can transform any surface in an ambient into a screen.

The device has to be connected to a projector. As first step it sends to the projector a set of lines forming a grid. The projector projects the grid in the ambient and the grid gets distorted by the surfaces it is being projected onto.
The distorted grid is picked up by the device camera and a computer creates a virtual model of the ambient.  At this point any image/clip that is fed to the device will be processed by the computer into a distorted image that matches the distorted grid resulting in a perfect image being displayed on the various ambient surfaces.

It is a very ingenuous trick. It also seems quite easy but actually there is plenty of software and processing to make this feasible.

I haven't seen the result but in principle the idea of being able to transform, in such an easy way an ambient into a seamless series of screen is intriguing. Just imagine the transformation that can take place. You can project anything on your ambient surface and get the feeling of viewing images on a giant screen. But this is just the start. You can imagine applications taking advantage of the surface shape in your ambient to create illusions that feel real in 3D, or that can transform some objects in your ambient into something else, as it is done at the "Fetes des Lumieres" every year in Lyon, France where main architectural landmarks in the city are transformed into amazing images by using them as giant screen and projecting images on them.

Lightform considers this as a ubiquitous user interface since it foresee the possibility to use any object surface as a point of interaction. I can imagine plenty of applications exploiting this possibility. Can't wait to see it for real!