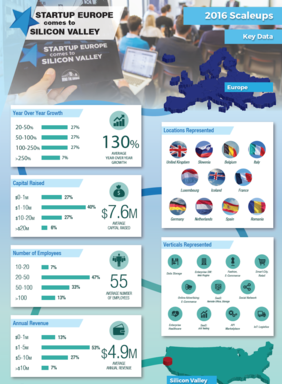 With total funding of over $60M and 1000 employees, they cover verticals such as e-commerce, healthcare, security and storage.

Mind the Bridge and EIT Digital today announced the finalists for the second edition of Startup Europe Comes to Silicon Valley (SEC2SV) - the premier program for future European startup unicorns to engage with main US industry players for sales, funding and collaboration opportunities in order to rapidly scale up on the other side of the Atlantic. CEOs from top leading European tech startups have been invited to San Francisco for a week of local presentations and meetings kicking off on September 12 with the European Innovation Day at the Computer History Museum in Mountain View.

The latest and most innovative tech companies from Belgium, Finland, France, Germany, Iceland, Italy, Luxembourg, Netherlands, Romania, Spain, Slovenia, Sweden and the UK, will be in the Silicon Valley to engage with the US market in their respective industries. With total funding of over $60M and 1000 employees these promising tech companies cover verticals such as e-commerce, healthcare, security and storage.

"These companies really epitomize European Innovation—the next TomTom, Spotify, or BlaBlaCar - and we are convinced that their participation in SEC2SV will strengthen the two-way bridge between the European and the Bay Area ecosystems creating value and jobs for both continents," stated Marko Turpeinen, Director of EIT Digital's Silicon Valley Hub.

15 scaleups were selected to represent Europe in the program, based on proposals by Silicon Valley-based partner organizations focused on a EU country or region. The requirements to be considered for the SEC2SV competition is to have had at least 10 employees 3 years ago and to be growing more than 20% year-over-year in revenue or number of employees. The final selection was made by a group of investors composed of Startup Europe Partnership (SEP) Investors Forum members and U.S. investors.

In addition to these 15 scaleups, five fast growing tech companies supported by EIT Digital Accelerator will join the delegation.

The chosen tech companies are:

FINLAND:
FIRSTBEAT technology (CEO: Joni Kettunen; Employees: 75+) turns heartbeat data into rich, personalized and actionable insights on exercise, stress, sleep and recovery. It is used by sports teams, corporations and consumers worldwide to improve their performance and wellbeing. Firstbeat has been selected by the EIT Digital Accelerator.

QARNOT (CEO: Paul Benoît; Employees: 27) has created the first computing heater using embedded microprocessors. Remotely computing for companies, it produces free heat for buildings. With no need for a data center, Qarnot provides the greenest and cheapest Cloud platform. Qarnot has been selected by the EIT Digital Accelerator.

SHOPFULLY (CEO: Stefano Portu; Capital raised: $22M; employees 125) is the leading smart shopping platform used by over 13 million users worldwide when getting ready to go shopping in their neighborhood.

NETHERLANDS:
SCISPORTS (CEO: Giels Brouwer; Capital raised: $1.5M; employees: 36) uses mathematical models and deep learning to analyze and predict the quality and potential of football players and teams. With their new innovation BallJames, they revolutionized the way how sports data is generated by transforming video footage into real-time 3D data.

ROMANIA:
T-ME STUDIOS (Co-founders Laurentiu-Victor Balasa & Matei Pavel, employees: 60) is a mobile publisher with more than 6,000 published apps in Google Play in the personalization and gaming categories, with tens of millions of users across their products.

SPAIN:
BEBEE (CEO: Javier Camara Rica; Capital raised: $6.5M; employees: 55) is an affinity social network which allows users to connect with other people who share the same interests and experiences.

SWEDEN:
FURHAT Robotics (CEO: Samer Al Moubayed) is a hardware and software platform for social artificial intelligence (AI). Furhat is a robot whose face displays unique expressiveness and emotion, and whose brain produces sophisticated and context aware spoken interactions. Furhat has been selected by the EIT Digital Accelerator.

GLEECHI (CEO: Jakob Johansson) has developed the first software that enables developers to create natural hand interaction in virtual reality. The software is also used in robotics to enable real-time interaction for robot hands and grippers. Gleechi has been selected by the EIT Digital Accelerator.

METAIL (CEO: Tom Adeyoola; Capital raised: $19,5M; employees: 47) has 6 patents granted and thirteen pending and is a fashion technology company that allows shoppers to try on clothes online. After inputting three basic body measurements and in less than ten seconds, customers can create their own 'MeModel' which is up to 96% accurate of their own shape.

PCA PREDICT (CEO: Guy Mucklow; Capital Raised; mployees: 58) Is best known for its market-leading address validation technology used to quickly complete your address when buying online. The company's range of services, all delivered via the internet, are specifically designed to boost business efficiency.