This is how EIT Digital is striving for a cyber-secure Europe! 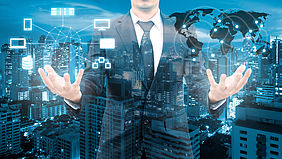 EIT Digital is committed to providing secure, robust, responsive and intelligent communications and computing facilities for the European business and society at large.

European Cyber Security Month (ECSM) is a European Union awareness campaign that takes place every October to promote the importance of information and cyber security among citizens and organisations. It highlights the simple steps that can be taken to protect data - whether personal, financial or professional.

The main goals of European Cyber Security Month are to raise awareness, change behaviour and provide resources to help people protect themselves online. EIT Digital - with its mission to drive Europe's digital transformation and commitment to provide secure, robust, responsive and intelligent communications and computing facilities for the European business and society at large - stands in the frontline to deliver these goals.

Here are some examples of what EIT Digital is doing year around to help Europe respond to the current key cyber security challenges.

As with most things, cyber security starts with the user. EIT Digital offers a number of online courses to develop cyber security competencies. These inlcude:

The confidence of European citizens that their private or business data is safe while using digital services is repeatedly challenged by so-called "phishing" attacks. Such attacks try to lure users into giving up confidential information to enable identity theft and fraud. An example of an EIT Digital Innovation Activity to counter phishing attacks is:

A Denial-of-Service (DoS) attack is typically accomplished by flooding the targeted machine or resource with superfluous requests in an attempt to overload systems and prevent some or all legitimate requests from being fulfilled. In a DDoS attack, the incoming traffic flooding the victim originates from many different sources. This effectively makes it impossible to stop the attack simply by blocking a single source.

The rapid growth of Internet-of-Thing (IoT) devices is providing a new power base for DDoS attacks. It has been estimated that by 2020 there could be 20 billion IoT devices in circulation. Many of these will lack effective protection due to still operating with default factory security settings, leaving them open to being hijacked as DDoS attack vehicles.

An APT is a prolonged and targeted cyber attack in which an intruder gains access to a network and remains undetected for an extended period of time. In addition to monitoring network activity, they may also steal data or cause damage to the network or organisation. An emerging form of attack is to make the data useless by corrupting its integrity.

An example of our Innovation Activity is Security Operations Centre for Critical Infrastructure - a customised APT detection and response service for infrastructure utilities like electricity, water and transportation providers as well as financial service providers.

Examples of our scaleups include:

Increasing trust in the secure use of digital services

Critical for Europe's success in the global digital competition is its citizens' trust in the safe use of digital services. Only in this way can European digital industry grow and prosper. This is particularly true in digital health and finance, with the introduction of new legal provisions such as the European Union's General Data Protection Regulation (GDPR).

Examples of our Innovation Activity include:

Social media has become one of the most dominant and influential channels for public discourse and information dissemination. Facebook alone accounts for more than two billion monthly active users and Twitter has over 330 million users, generating an average of 500 million tweets per day.

The Sensemaking Innovation Activity brings order to social media and predicts the spreading patterns of new topics, allowing early engagement and enabling social media strategies to be designed to effectively meet users' goals. That could be anything from maximising awareness and dissemination of a topic or adopting containment strategies to help limit the spread of fake news.