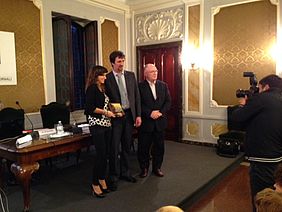 On October 24th in Rome, at the headquarters of the Italian Federation of the Newspaper Publishers (FIEG), the innovation award “Nostalgia for the Future 2013” is assigned to the project dedicated to the interaction with children with autism, developed by the Research Unit “i3” of the IT Centre of the Fondazione Bruno Kessler (FBK) in Trento.

Michele Marchesonii and Massimo Zancanaro (FBK researchers) and Cristina Molinatti (educator and consultant at the FBK) have developed a tool to help therapists and educators to interact with children with autism. The research, conducted in the laboratories of Unit " i3 " (Intelligent Interfaces & Interaction) of the IT Centre is collaborating of various international partners working in the field of Human-computer interaction.

At first glance it looks like a normal desk lamp, but the “magic lamp” has a particular feature: a camera is build inside the lamp and it registers what is happening on the desk. When you place a sheet of paper on the desk, the camera catches every movement and sends it to a computer connected to lamp. On the computer is installed a software that allows to manage interactions between medical staff and children. By use of physical objects that imitate the typical icons of recording (for example, “play”, “stop”, “pause”), the lamp can be used to record a voice and makes it possible to listen to it later on. By using the system you can interact with the images drawn on a sheet of paper, that is flexible and adaptable tool, and use it to communicate with others. The educational program for children with autism is enriched with this new feature that allows therapists to have higher interaction with children.

All interactions are stored in a database available to the therapist for further analysis. „This innovation will help therapists and educators at their work – says Zancanaro, head of i3 unit at FBK – because it adapts technology to a normal work environment”.

The system has been further developed thanks to European funding, with a field trial carried out at the San Camillo Hospital in Turin, involving fifteen children in a period of about 8 months. European collaboration has allowed to integrate other tools developed by the Polytechnic of Milan, and through the support of the EIT ICT LABS (European Institute for Innovation and Technology), is exploring different ways to bring this innovation to the market .

With its fifth edition now, the award “Nostalgia for the Future 2013”, organized by the “Friends of Media Duemila” in collaboration with the FIEG (Italian Federation of the Newspaper Publishers) and the Osservatorio TuttiMedia , is dedicated to the memory of Giovanni Giovannini, who was president of the FIED for twenty years and was afounder of “Media Duemila”.  It is a prestigious award designed to bring out and bring to the attention of public  - people, institutions, companies and organizations that have contributed with ideas, projects and achievements to the progress.