Telepresence for People with Communication Impairment 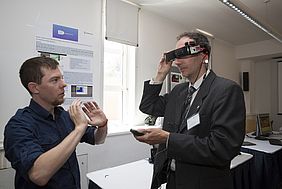 The goal of the competition is to show the world how much fun AI is by documenting exciting artificial intelligence advances in research, education, and application.

The rules are simple: Compose a short video about an exciting AI project, and narrate it so that it is accessible to a broad online audience. Student participation is strongly encouraged. To increase reach, select videos are uploaded to YouTube and promoted through social media (Twitter, Facebook, G+) and major blogs in AI and robotics.

The eighth AAAI Video Competition was held in conjunction with the AAAI-14 conference in Québec City, Québec, Canada, July 27-31, 2014, at the yearly conference of the Association for the Advancement of Artificial Intelligence (AAAI), where at the award ceremony, authors of award-winning videos were presented with "Shakeys", trophies named in honour of SRI's Shakey robot and its pioneering video. Authors of the winner student team (Gyula Vörös, András Sárkány, András Németh, Anita Verő, Gyula Szaffner and András Lőrincz) stylishly expressed their thanks in a short video reply.

The purpose of this conference is to promote research in artificial intelligence (AI) and scientific exchange among AI researchers, practitioners, scientists, and engineers in affiliated disciplines. This year the event was collocated among others with CogSci 2014, the annual conference of the Cognitive Science Society. AAAI is a non-profit scientific society devoted to advancing the scientific understanding of the mechanisms underlying thought and intelligent behaviour and their embodiment in machines, as well as promoting responsible use of artificial intelligence. AAAI also aims to increase public understanding of artificial intelligence, improve the teaching and training of AI practitioners, and provide guidance for research planners and funders concerning the importance and potential of current AI developments and future directions.

The working prototype of the system shown in the video has received earlier the Communications Award (Prix Communication) of the Challenge Handicap & Technologies 2014 - Reseau Nouvelles Technologies APF conference in Lille, France, 26-27 May.

Part of this research was carried out in the framework of the EIT ICT Labs carrier project of the Budapest Associate Partner Group financed by the Research and Technological Innovation Fund, Hungary.

Congratulations to the team!

Other related videos about the background and earlier works of the research group: Infocommunication devices - ELTE-Bliss, Mousense for Android.