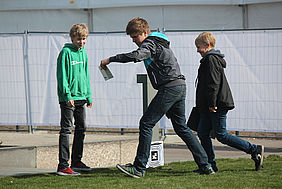 "Can we win anything?" asks a breathless 13-years-old boy his two classmates as they’re running on the grass next to the Helsinki Music Center. They are heading towards a tiny 20 x 2 cm piece of cardboard. The barcode on the board will reveal something. They point the code with their mini tablet computer and the next clue in the technology adventure "Professor Millennium’s lost laboratory" is found.

The technology adventure has been created by EIT ICT Labs in the Smart Spaces Action Line. It is part of the Millennium Technology Prize celebrations taking place at the surroundings of the brand new Millennium Pavilion and at the city center of Helsinki. The Pavilion organized programme for public audience, school kids, students and invited guests during 28 April - 14 May, 2014.

The participants in the technology adventure were on the 7h grade in elementary school. In this city orienteering they looked for Professor Millennium’s inventions that were spread around the pavilion in an explosion. The experience lasted for 1.5 hours, starting and ending in the Pavilion and going through 8-12 checkpoints with different kind of digital technology driven puzzles and tasks that children solve in groups of 3. 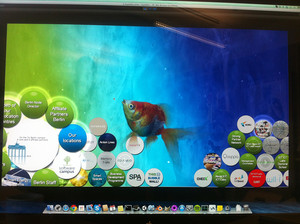 There will be no prizes in the race but it doesn’t matter the boys. Searching the inventions seems to be fun. They use small tablets and augmented maps to navigate and explore the environment. With these equipments they get clues about the lost innovations. In addition, different kind of sensors, interactive large screens, and technology installations were used.

The adventure is based on augmented reality and smart spaces. But the boys are not interested in the fine technology. They just want to follow the Linus fish that appears on the map when they look at it through the tablet. The tiny fish shows the direction to the next spot.

What makes the adventure unique?

Augmented reality or smart spaces are not anything new. The uniqueness of the adventure lies somewhere else: "This is a combination of smart spaces, well-thought content and new techniques in a way that has not been seen before", summarizes Marko Turpeinen, Director for EIT ICT Labs Helsinki.

The big challenge with using augmented reality in the technology adventure was bringing it outdoors. The variation between lights and shades makes it difficult to get the technology to "understand" the shapes. The horse at Mannerheim statue is replaced with an augmentation of a car when watched through a mini tablet. But when the sun gets behind the clouds it is more difficult to perceive the statue to be the same as it is in the sunshine.

The man who created the augmented reality applications in the technology adventure is Alain Boyer from VTT Technical Research Centre of Finland. He sees the biggest opportunities with augmented reality in the industry even though it is much more sexy to talk about it in marketing or consumer products. 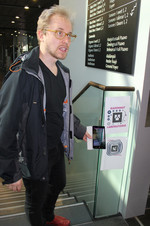 The technology adventure also proves that augmented reality is getting to the level that it can be taken into action relatively easily. The consumer doesn’t need to have heavy manuals or take days to learn to use the applications. "This production showed that using augmented reality in real entertaining and commercial production is a reality, and in the next upcoming years it has potential to change how we experience many places, such as malls, sports facilities, stadiums, museums and amusements parks, and that it can also help to set up events in totally new ways in spaces", says the producer of the adventure Kai Kuikkaniemi from Helsinki Institute of Information Technology HIIT.

"Great", "cool" are typical comments from the school kids that have just finished their adventure. But not only positive comments arise: "Some equipment could have been better", says a group of three girls.

The comment doesn’t come as a surprise since these digital natives are difficult to please. Most of the school kids take all the technical finesses in the adventure for granted. They are already the generation that has been born with a mobile phone or tablet in their hand.

Turpeinen sees here the biggest challenge: "How to make a funny experience to a group who has a very critical attitude towards technology" he wondered excited before the first tour started. Luckily his worries were in vain as the kids had a great time.