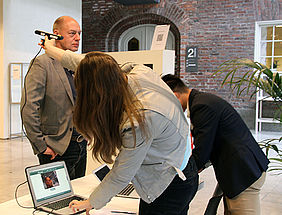 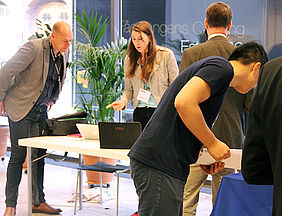 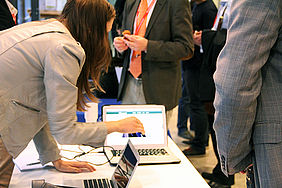 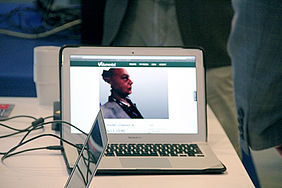 At the Economist conference held at the main library of KTH on June 13 a few selected research projects and startup realisations of research were demonstrated. One of them was Volumental who offers a cloud-based 3D scanning solution that makes it easy for anyone to create 3D models of people, objects and rooms.

Volumental is a spinoff from a research project called Kinect@Home at KTH and has been supported by KTH Innovation and STING as part of EIT ICT Labs Business Development Accelerator Program.  Read or download folder with a full overview of EIT ICT Labs Stockholm startups.

Enabling people to create 3D models which has been an expensive technology, mainly used by industry, fitted well in the agenda that focused on how technology and digitalisation changes how people will live, do business and engage in forming the future society.

The Swedish Foreign Minister, Carl Bildt, joined dozens of leading innovators, researchers, entrepreneurs, futurists and policymakers at KTH Royal Institute of Technology in Stockholm on June 13 for Digital Horizons, a day of presentations and panel discussions on the threats and opportunities of the next wave of digitalisation.

The conference culminated with a speech by Bildt, who addressed internet freedom as well as the “threats and vulnerabilities of societies in an increasingly hyper-connected world.”

While issues of cyber security and privacy have become increasingly difficult, the former prime minister said that digitalisation also has potential to enable “open and dynamic democracy.

“It goes far beyond the average politician commenting on Twitter – I think it is a truly revolutionary change,” Bildt said. “We see mechanisms for accountability, which enhances trust in the political system, gives voice to citizens and it does empower people.”

Read more in the article by David Callahan, KTH website