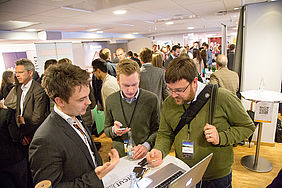 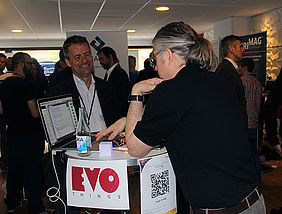 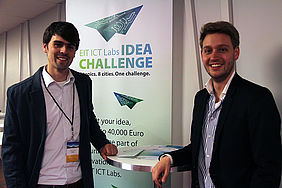 More than 130 investors from 11 countries attended STING Day 14 on May 8th in Stockholm looking for the next big thing among the 70 exhibiting startups within ICT, Internet & Media, Life sciences and Cleantech.

"The international interest is bigger than ever before", remarked Pär Hedberg, CEO and founder of STING, Stockholm Innovation and Growth, the non-for-profit incubator set up by the city of Stockholm, the Electrum Foundation and KTH ten years ago. In their press release he stated that at STING day the investors get the chance to meet the companies and get first hand insights into why Stockholm is ranking highest in the world on innovation and entrepreneurship.

The main idea of STING Day, this year held for the fifth time, is to support Swedish innovative startups in scaling up and become international players with larger impact, but there were also a few startups from other nodes of EIT ICT Labs participating this year, such as Health-I from the Netherlands and Cringle from Germany. EIT ICT Labs Business Director Klaus Beetz and the Business Development Manager Dolf Wittkamper were also attendingthe intensive day of interaction and networking.

The networking area and pitch sessions for ICT, Internet and Media, Cleantech and Life Sciences engaged a number of the Swedish startups coached or supported by STING and EIT ICT Labs BDA team in Stockholm, such as Volumental, Shortcut Labs, Relationdesk, Evothings and Virtual Grasp.

The last two were also selected for the final of the Idea Challenge for Cyber-Physical Systems.

This year the ordinary pitching by startups to investors was reversed and it was an entertaining and educational session when four investors pitched and were questioned by four startup CEOs. There is a growing interest from investors to check the Stockholm startup scene which is evident at the Sthlm tech meetups, hosted by Tyler Crowley, also the moderator of the investor pitches.

In this video from STING Day 2014 (mainly in Swedish but at 1:20 in English) business angel and founder of Lakestar, Klaus Hommels, shares his opinion on why Stockholm is an interesting city for investors:

In Stockholm there is a special combination of an entrepreneur that is tech-savvy, good in English, has a global perspective and also a sharp business sense.