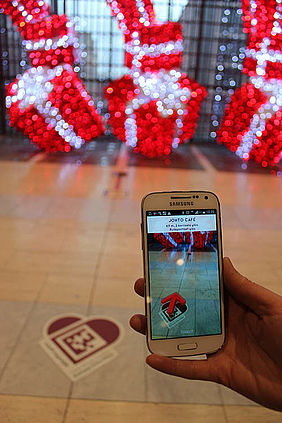 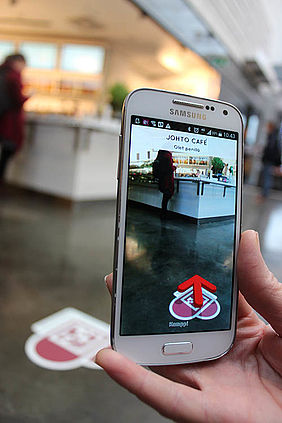 Between December 2014 and January 2015, a new mobile guide was piloted in the Kamppi shopping centre. With the help of a smartphone application and heart-shaped signs on the floor, people were able to find stores and services fast and easy.

The mobile guide is based on Bitsign technology developed at EIT ICT Labs and  utilises augmented reality. The service is designed to find fast services in the shopping center: the user downloads the application, chooses a store/location from the menu and scans the first heart-shaped sign at sight. After that, arrows on the screen show which way to go. There were 250 marker signs placed around the shopping center.

“Technically the app worked well. The pilot give ideas of the number of stickers and the quality needed for high traffic areas like Kamppi,” says Kamppi shopping center manager Heli Vainio.

During the pilot, Forum Virium Helsinki was on location and helped people to download and use the application. A user experience survey was also conducted with an online questionnaire, reaching 50 replies.

In general, the application received very positive feedback. A majority of people who had time to test the app, also found it useful. They felt that the service was easy to use, fun, and even positively surprising.

It was clear for users that this kind of application would be handy in an unfamiliar place and especially if there was a specific need at hand. The application would naturally work in other shopping centres, but also hospitals, libraries and other big public spaces. Or it could help those who were lost.

“The application worked well once customers had it downloaded on their phones, but the idea of offering it to busy commuters as a tool for way-finding didn’t work out. When in a hurry, people don’t have extra time to use for downloading,” Heli Vainio continues.

When time is the essence, people would probably benefit more for a generic city application offering commercial and non-commercial applications alike. A service, that would already be in your mobile phone without major extra effort, and work as a Bitsign-styled way-finding service, among others.

“Bitsign is aimed to become an open data and open API solution for way-finding. It can complement other location techniques or work standalone. Core thing is that it should make providing and experiencing way-finding simpler and bridge way-finding to other onsite digital experiences such as augmented reality based exploration of site,” says Kai Kuikkaniemi from Helsinki Institute for Information Technology HIIT.

Bitsign was created in an EIT ICT Labs activity and get also support for its development and marketing. The Kamppi pilot is part of EIT ICT Labs` Street Smart activity run by HIIT, Aalto University, Nokia, Robust North, Vincint and Forum Virium Helsinki. Forum Virium Helsinki participated in planning and production of the pilot and concept and marketing.