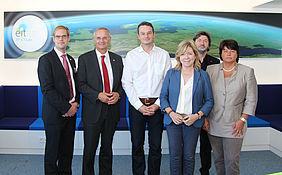 A presentation of the Video Café - a tool with which to communicate with other locations in the ecosystem 'over a cup of coffee' - caught the MEPs attention as they enjoyed the interaction with people in front of the camera in other nodes. As CEO Willem Jonker joined the Video Café from Eindhoven Lambert van Nistelrooij even took a chance and asked him a question or two.

The honoured guests took a particular interest in education and innovation in Europe, by focussing on the role of startups in our ecosystem and the concept of Software Campus, as lively debated after several presentations on the above themes e.g.