Of course, it is here! 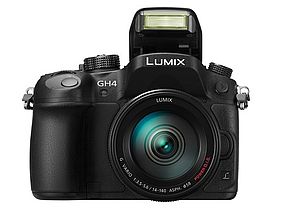 The DMC-GH4 from Panasonic

After the growing availability of 4k televisions and Apple Mac Pro supporting 4k rendering and screens it was just a matter of "what are they waiting for", with they meaning the digital camera manufacturers!

And here we have the fist DSRL camera announce, the DMC-GH4 from Panasonic, to deliver 4k video (actually the GoPro announced 4k capability at the end of 2013 but this is the first DSRL camera doing it).

It was not a matter of sensor resolution. DSRL have exceeded the required sensor resolution for a 4k filming quite some time ago. It takes only 8Mpixel to get 4k and that was available already in 2003 (it went mass market in 2005).

The challenge was, is, to have sufficient processing speed to convert the data captured by the sensor into an MPEG coding supporting 4k. But, as we know, processing capability is only a matter of time and of ... power. And it is actually the latter that has probably delayed the appearance of DSRL 4k enabled. You don't want to drain your battery!

It is quite easy to predict that the other brands will follow suit. So let's expect a Canon and a Nikon new model and in just a few more years (3? - my bet) expect also cell phone cameras delivering 4k video.

YouTube is apparently also getting ready to host and stream 4k videos... as is Netflix that presented its 4k streaming at CES in January 2014. They are using the H.265 codec that magically compress a 4k signal in the space used today by an HD signal (although you don't get exactly a 4k quality, but you get sufficient quality to mistily your eyes...).

Interestingly, it seems that the ideal transmission media as we move to 4k (and beyond) will be the fibre, no more satellite nor wireless spectrum. That is simply too costly and can be better used by providing mobility services.

The prediction of Nicholas Negroponte, the MIT Media Lab founder, were correct. More and more voice will be using wireless spectrum (it is already so in most part of the world -for the last mile of course) whilst television will progressively move from wireless to wires.

This of course will increase by an order of magnitude the amount of traffic on telecommunications fixed network but there will still be plenty of capacity for further growth. A capacity that event the next decade 8k will not fill up.