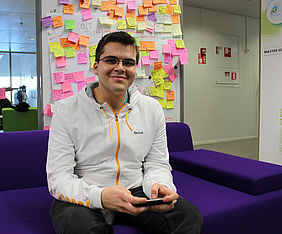 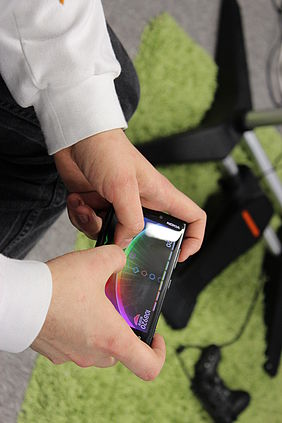 The most popular music game app in the Windows Phone Store is SongArc. The app has been downloaded more than 800.000 times in just three months and it has received praising feedback. SongArc is ranked the number one in music games and number six in all game apps in the Windows Store.  One of the developers is Adam Kapos, a master student at the EIT ICT Labs Master School.

“Our aim is to get 1M downloads”, says Hungarian Adam Kapos, chief designer of the app, proudly.

The three men development team has been amazed by the success of their app. Before the launch they had set the target to 250 000 downloads, but this was achieved in just a few weeks.

SongArc, launched in October at the Windows Phone Store, was finalized with the support of the Finnish app accelerator, AppCampus. AppCampus is based in Otaniemi and run by Aalto University, Nokia and Microsoft. SongArc is one of the 40 products and 180 ideas that AppCampus has so far supported. The SongArc team got a lot of coaching as well as 20 000 Euros for the development work. “The best was to hear real life experiences, how successful companies operate and run their projects. AppCampus support was fundamental for us”, explains Adam.

The trick in the game is your own music

In SongArc one tries to touch the dropping geometric, colourful forms before they touch the bottom. The forms drop in accordance with the music the player has chosen. This creates the illusion that one is actually playing the song. This combination of music and forms is called a “sheet” and the user can create his own sheets or download sheets that other users have already created.

Even if the game has sophisticated functionalities, Adam believes that the reason behind SongArc’s success is in the music. SongArc is the only music game in Windows Phone Store where the player can use his own music. “The feedback has been positive from the very beginning. A beautiful game and long waited for”, quotes Adam some of the feedback.

Lately the great success has been calming down due to the fact that parts of the content have been made chargeable. The team is constantly developing the game further to keep it attractive.

At the moment the chief designer of the game, Adam, studies at Aalto University in the EIT ICT Labs’ Master School programme. He received his BSc from the Eötvös Loránd University (ELTE), Budapest, where he got acquainted with game development for Windows Phone on a special course and built relationships with the Hungarian Windows Phone community. His first app, RumRun was awarded 3rd price on Microsoft Imagine Cup in 2012 and after this success his professors at ELTE recommended him to apply for EIT ICT Labs Master School. He continues his studies at ELTE on the second year of the Master School after September 2014.

Watch the video on how this success began at ELTE University, Budapest.