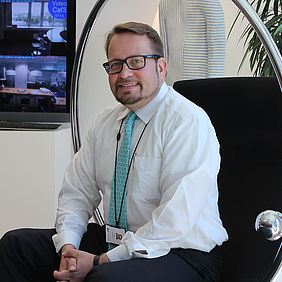 We are happy to welcome Professor Tatu Koljonen as the new Director for the Helsinki Node. Tatu started in the position on May 1, 2015. He is replacing Marko Turpeinen who is now leading the Silicon Valley Hub of EIT Digital. Tatu shares here his views on his role and ambitions.

What specific objectives do you want to achieve as the Helsinki Node Director?

In the new job I am excited to see how our concepts work in practice, instead of only theorizing about them. During the five first years of EIT Digital, we have also gained a higher level of understanding what digitalization really means and requires for Europe, which accents the need for EIT Digital. In the internet economy we are witnessing an extreme accumulation wealth and ”uberization” of work, which we have learn how to embrace. I also want to make Helsinki Node the best place to work through clearest purpose and brightest people.

You have previously worked for both Nokia and VTT, core partners of EIT Digital. How do you think these positions will contribute to your work as Node Director?

Those positions are of course of great help. First of all, they have provided a versatile personal network in the field. As VP of Strategic Research into ICT at VTT I was one of the founding fathers of EIT Digital. VTT being among the most active players in EU research, I gained hand-on and in-depth knowledge of the European innovation system. For example I actively participated in defining and implementing new instruments for both EU and national innovation systems including Artemis and ECSEL JUs, and Digile Ltd. So I know the current bottlenecks and efforts to solve them.

At Nokia I set-up a new organization in a foreign country from scratch, when I was the GM of NRC Japan. I learned to enjoy leading and motivating people of different frame of reference. I also got experiences of the difficulties of corporate venturing at Nokia Ventures organization. It is funny to see that most of the currently used novel innovation concepts were already there when acted as tentacles for the company and gathered the weak signals into Nokia WorldMap at Insight and Foresight unit of Nokia Corporate strategy.

What do you find as the strengths and opportunities of EIT Digital?

The strength for EIT Digital is that now everybody in Europe believes in the digital transformation. When we started, the need for Digital KIC was not so commonly shared. The opportunity is that by sharing, trust and joint vision in our network, we’ll get bigger and better than the other innovation hotspots and are able to seize more than our fair share of global monopolies in the internet economy that is reshaping all industries and societies.

The challenge is to find activities where the catalyst role of EIT Digital is evident - things happen at a multiplied speed and the catalyst does not wear in the process. The temptation is to participate in the process, not just to catalyze. In innovation actions, this could mean doing a little more of the same research instead of finding new ways to commercialization of the results, in which case we fail in getting the radically multiplied impact. Secondly, also the bottlenecks of the innovation system migrate. When we find and cure one bottleneck, another appears. We have to be agile to spot new bottlenecks and respond to them in new types of activities.

What are your favourite things to do on your spare time?

I play Finnish baseball in the summer and sing opera in the winter. Finnish baseball is a joint hobby with my two sons, aged 16 and 12. So typically I spend the first week of my summer vacation on a baseball camp driving boys between games and eating and sleeping on a classroom floor of some school. I will be playing against my older son in the same league already for the second year and I am happy to say he beats me in running, batting and throwing. In the winter I don’t understand my fuzz about the Finnish baseball, but concentrate on singing. It badly seems my breakthrough was still not this year.