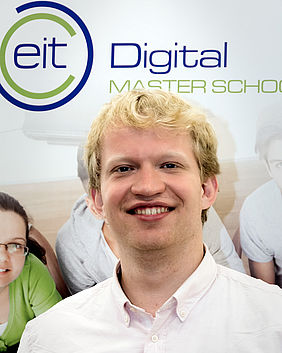 "What will be left of humankind if computers can do it all?"

Thomas Langerak envisions himself becoming a professor on the subject of human-machine interaction. "What will be left of humankind if computers can do all? That's what I would like to be a professor in." For now, his next step is to finish his EIT Digital Master School Programme in Human Computer Interaction and Design.

Langerak (23) enrolled in the EIT Digital Master School in September 2016, after having a Bachelor in Industrial Design from the Eindhoven University of Technology in the Netherlands. Now, at the Aalto University, an EIT Digital partner, he turned out to be not only the youngest student in the EIT Digital Master School class, - "most students in Finland work first before entering a Master's"- but also the exception to have no technical background. But so far, this has not been a problem. "The focus is very much on design, so I often feel I am ahead of the more technical students."

How did you hear about EIT Digital Master School?

"A fellow student of mine in Eindhoven was entering the EIT Digital Master School. That is how I heard about it. What appealed to me was the fact that I could study in two different countries at two different universities, and that I would receive two degrees and an EIT certificate on top of that. The entrepreneurial part was not a driver. I just wanted to study abroad. Studying in two universities was the main reason to choose the EIT Digital Master School. That I, as a European student, do not have to pay any tuition fee was most welcome as well."

Yet, you will do your second year in your home country, the Netherlands at the University of Twente. How does that match with your international orientation?

"I want to specialise myself in machine learning. For that, I think the University of Twente holds the best cards. I want to do research in human-computer interaction. The overlap between smart machines and human beings is at the core of my interest. How will we deal with smart machines and how will smart machines deal with us? My specialisation will demand more technical skills. I do know how to code, but I will feel behind at Twente in comparison to my peers than I felt in my first year. So, I will have to put in extra effort to keep up."

What do you want to do with machine learning?

"It is so interesting. Design becomes more and more technical. There is a shortage of people who can think like me with my designer's background. So, to me, machine learning is a logical step. It is interesting to wonder what implications machine learning has for humankind kind, if computers can learn how to design. If computers can be creative, then creativity is no longer purely a human trait. Where will that leave us? What is mankind still, if computers can do everything? I want to research that. I would like to be a professor in that subject one day."

If you want to become a professor, what will be your next step?

"I want to do a PhD. The academic world appeals to me. I really want to do research because I want to stay curious. In the academic world, being curious is a good asset, there is no limit on the number of questions you ought to ask. Within five years, I will have finished my PhD and could become a postdoc or researcher in a big company like Google. I would prefer to work for a company in a Northern European country or in Canada. I do not know yet, if I want to do research in a research lab in a university or in a company. I just want to understand the world. I might consider the EIT Digital Doctoral School. The industrial doctorate sounds interesting."

What do you think about the EIT Digital Master School?

"I have had mixed feelings. Beforehand, I did not know what to expect from the innovation and entrepreneurship (I&E) classes. I certainly did not realise that they would make up a quarter of the entire Master's programme. If I had realised that then, I might not have chosen this. The I&E curriculum was totally outside my comfort zone and I had a very negative view on the startup scene and the people within it. I thought it was hype-based and that the people involved were ego-driven. Now, I realise that I have learned a lot in my I&E classes. Things like adaptability, a certain way of working, not being afraid to make decisions and come back on decisions taken. I can do that now as well. I have unlearned to discuss for hours on futile decisions. So, I am glad I have made the choice to attend the EIT Digital Master School. The school has helped me to step beyond my own comfort zone. That is enriching."

So, you might even become an entrepreneur yourself then?

"Mm, not really. I have adapted myself to embrace an entrepreneurial mindset. But I will not create a startup as a mission on itself. That is not my ambition, though I might go for a spin-off of my university work later. Anyway, entrepreneurial thinking is a necessary skill nowadays. This is part of the new way of working. It is expected for you to be adaptable, that you dare to take decisions and that you also dare to question these decisions when new insights appear. Indeed, you should be able to take a few steps back sometimes."

What else have you learned from the EIT Digital Master School that you would not have expected?

"At Aalto, we are a very tight group with fifteen international EIT Digital Master School students. The EIT Digital co location centre in Helsinki is excellent and offers a lot of good facilities. Being the sole Dutch person in an international group has given me a lot of perspective about thinking and working with people from different countries. For example, in the Netherlands, it is common to dispute everything. Some people of other cultures just absorb and follow. That was something I sometimes found difficult. You expect interaction on proposals you make, but some people just accept everything without questioning. All these cultural differences have been very enriching. I can better communicate now with people from different cultures. I understand people better because I can handle these background differences."