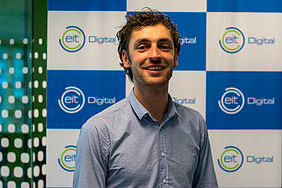 "Being an entrepreneur could be my future"

Erik Wouters is enjoying the EIT Digital Master School Winter School in Eindhoven. It is the first time he has met his fellow students. Wouters' situation is different. Unlike the others, he did not start his study at the beginning of the academic year but enrolled in the second semester. His admission process wasn't the same as the others either. He was admitted via Coursera. How did that happen?

In 2017, EIT Digital Academy and the Eindhoven University of Technology (TU/e) developed a new student selection method via Coursera, where EIT Digital has published over 17 separate Massive Open Online Courses (MOOCs) and five Small Private Online Courses (SPOCs). The 22 courses, if fully completed, comprise 30 European Credit Transfer and Accumulation System (ECTS), which are equivalent to taking the first semester of the EIT Digital Master School Programme Embedded Systems. Wouters was one of the first two students to qualify for the selection process and has just been admitted to the second semester of the programme. He can say that he is one of first students in the world taking a Blended Master School double degree.

Why did you not apply for the EIT Digital Master School in the regular way, like the other students?

"When I heard about the EIT Digital Master School I was interested in applying. I liked the combination of entrepreneurship and technology. But it was already July by that time. The Master School office said I was too late; the admission period had closed on April 15. At first I thought I had to wait until the next application round. In the meantime, I looked for online courses and found EIT Digital on Coursera and read something about the chance to be selected for the Master's programme. I contacted Martijn Klabbers (online education lead at EIT Digital). He explained that I need to complete a number of online courses before a certain date. I immediately started doing that and took part in the selection process."

How do you judge the online MOOCs?

"In general, the quality of online courses can vary. The founder of Coursera made some very good ones on deep machine learning. But I have also completed courses where there is no test or they are too complicated or too dull to finish. The EIT Digital courses are well structured. I have found the courses by Anne Remke, Professor in Computer Science, and Dr Pieter Kuypers, assistant Professor Mathematics and Computer Science at the TU/e particularly good. I would rate EIT Digital's online courses 8.5 on a scale of one to ten. So, that is very good."

Did you study the same amount of time as students who started on campus?

"I started in July, but I finished all the courses within the timeframe. I was even ahead of the deadline by five weeks. I did calculate how many hours I had studied and how much time was allocated for the study. I finished some courses earlier than expected and for others I took more time. In general, I finished the course in the allotted time. I spent a quarter of a year on it in total."

"It is very practical. Every moment you have some spare time you can learn. No matter where you are. You can work anywhere. If you get a notification to read a text or to watch a video, you can do that wherever you are. That is very efficient. That speeds up the study."

What did you have to do to be selected?

"Well they were the standard things all students need to do. Send in a resume, diplomas, documents, references and so on. In addition, I had to come up with a startup idea and then had to pitch it. It was difficult to get all the formal documents together because at the time I was in New Zealand. After the online selection procedure, I had to do two Small Private Online Courses (SPOCs)."

"After my girlfriend had finished her Master's we wanted to go on an adventure. I did not feel the urge to stay longer at the Technical University of Delft. We both found jobs in New Zealand. I was working in electrotechnics and followed some sociology courses on Coursera."

When did you come back to the Netherlands?

"I moved to Eindhoven on January 15, just before my exams on January 22. Unfortunately, the grades on the Coursera courses do not count as study results. So, I had to do the regular exams just like the campus students. That was a bit difficult because there had been a time lag between my study and the exam. That is not ideal. But the hard part was that the campus students had taken some extra modules, about machine learning for example. I had not done that, but nevertheless it was part of the exam."

How was your first encounter with your fellow-students?

"Well, the lessons are yet to start. I was already in contact with Christopher Ohara, the other Coursera-selected student. I picked him up from the airport. The first time I saw the campus students was during the exams, but I got to properly meet them at the Winter School. I have found them to be very nice people. It is a very international community and all of the students are very talented. I've noticed there are very few Dutch students. I really enjoyed the Winter School. It is great to work with a team of students for two days on a business case. As it turned out, I was also in the winning team with our idea on early fire detection. It was relaxing. I learnt a lot in a very short time."

Why do you want to be at the EIT Digital Master School then?

"It seems to be a fantastic opportunity for me to study at two different universities. That is one of the highlights: you see twice as much! Aside from the technical part, I was attracted to the entrepreneurial education. If you want to learn something on entrepreneurship this is the perfect way of learning it. At normal universities you have to learn that part on the side. Here, it is integrated into your diploma. That is the best. And, you don't have to give in on the technical education. You do the classes alongside students undertaking technical studies only. For example at TU/e, I follow the embedded systems classes with the rest of the Embedded Systems programme students from the university."

What are your plans when you finish the masters?

"My second year of study will be in Sweden. A fantastic country. The chances are that my girlfriend will also want to join me there, so I might stay. First, I would like to do an internship at Volvo, working on autonomous cars. After my studies, I might want to work for a while to gain some experience. But it is also my dream to start my own company one day. Being an entrepreneur could be my future."