Social entrepreneurship is a rather new concept in the Scandinavian countries. Sweden is one of the top countries in the world regarding sustainability, innovation and gender equality so the environment for social entrepreneurs is good.

However, it is only the last few years that things have really started to happen. Recently a number of support organisations and social investment funds have been established, such as CSES – Center for Social Entrepreneurship at Stockholm University, Impact Invest Sweden and the Toniic network, Ashoka etc.

The potential of finding ideas, projects and companies who can make a social impact in Europe attracted Johannes Weber from the Social Venture Fund in Germany to come to Stockholm for a pitch event and networking at the EIT ICT Labs Stockholm CLC. In order to use the fund’s capital for the most effective social impact, the Social Venture Fund focuses on financing the growth and expansion of already proven and successful social enterprises.

An example of such a social business is AUTICON who employs individuals with Asperger Autism for their outstanding abilities in specialized IT services such as software testing. With their attention to detail and sustained high concentration levels in repetitive tasks, they achieve significantly lower error rates than the average IT tester. AUTICON was set up in 2011 in Berlin and employs around 350 people.

David Lundborg, Center for Social Entrepreneurship CSES, shared their setup and how entrepreneurs can get involved in an early stage in Sweden. Their focus is a blend of social and economic value and gave an example as how “sharing is the new buying” – the company Flexidrive. Their idea is a platform for people to rent their cars to neighbours, providing guaranteed insurance and payment solutions.

Jacob Rasmussen, from City Mart in Denmark, presented how the initiative, to build a global marketplace for innovations in cities became City Mart which now connects 50 cities worldwide. The goal is to facilitate a more efficient way to spend public money and improve procurement processes and in the end the lives of the citizens. 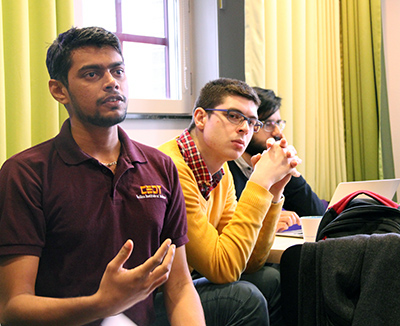 Ruth Brännvall, Impact Invest Scandinavia, also underlined that the intent of the investor in social enterprise is to generate social and / or environmental impact and a more patient perspective on financial return. The organisation is also the Scandinavian partner of Toniic, an international network of action-oriented impact investors in over 20 countries.

The event at the Stockholm CLC was very well received, by the investors, by the pitching entrepreneurs and interested audience from the local ecosystem. For further information please contact Karoline Beronius, CLC Manager EIT ICT Labs Stockholm.