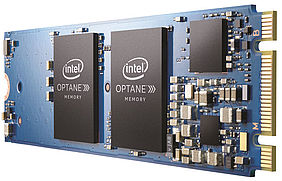 Intel’s Optane storage device is a fast solid-state drive. Next, the technology will be used to create memory modules. Credit: Intel

If you think that Memory and Storage is one and the same, think again!  Storage is for keeping our data safe for quite a long time with very little cost associated to it (which makes sense since we are talking about long period of time) in terms of power. Think about a magnetic storage where you need power just to write the data and then to read it (it is like using a closet, you need power to open and close the door but once the stuff is inside the closed it needs no power to stay there). Unfortunately, the technologies we have for storage are slow in terms of read/write and to speed up things when processing data we use different technologies to memorise them for the short period it takes for their processing. These technology are fast but need power to preserve the data. Imagine placing things on a rotating conveyor. When you need something you just grab it as it passes in front of you, but you need power to have the conveyor rolling and the faster you want it to roll the more power you need (for memories it is not exactly like that but I hope it gives you the idea).

As in many things in life it is a tradeoff between cost and speed.

Now Intel has come up with a new technology, Optane, that is leveraging on the best of both worlds, providing a chip that is as fast as a memory chip and as power savvy as a storage chip.

In March Intel has announced they will start to sell these new chips to data centres. They are non volatile like flash memory (hence they do not need power to keep the data stored) and are fast as DRAM.

Unfortunately they don't come cheap: a 375GB drive cost 1,520$ three times as much as a SSD and 30 times as much as a magnetic hard drive. However, we know the trend: they will get cheaper and cheaper. Today they are targeted to data centres where speed is important and the cost of energy is huge. Tomorrow, they may reach a price point where they will be affordable in other applications and eventually they will find the way to our homes.

If Optane will deliver as promised it will indeed be the holy grail of storage, marrying memory and storage in a single chip. So if you thought memory and storage were one and the same just stick to it a few years more and you'll be correct!