Looking into the Future, one day at a time 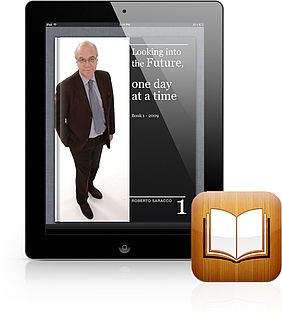 Read interactive books about future technologies on your iPad

The interactive Book series "Looking into the Future, one day at a time" include the posts that Roberto Saracco has been writing on his blog since 2009. Because of the size he has decided to generate one interactive Book per year. In collecting more than 1000 posts that were written over the last 5 years, Roberto Saracco has included some comments on what indeed has materialized. Five years are not a long span of time, but the evolution of technology is so fast that one can, in many instances, really see the future unfolding and becoming present.

The interactive Book is actually more than just an archiving, it is actually a reflection on how the future unfolds in front of our eyes to become the present where we live in.  Whilst the 2009 and 2010 most posts focused on general trends the latter posts are based on specific evolution with thoughts on how these would affect us all.

The series of interactive Books have been created with the support of Telecom Italia. Comments to the posts have been prepared while Roberto Saracco was Director of the EIT ICT Labs in Italy.