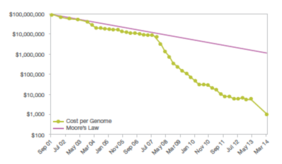 And here we are. Illumina has announced the availability of a system for genome sequencing that can sequenced thousands of genomes per year at a cost of 1,000$. The system, HiSeqX Ten, will be commercially available in the first quarter of 2014, with already for of them ordered from Australia, South Korea, and US.

On the one hand it is amazing to see the clockwork precision of technology evolution estimate, on the other we are now just beginning the exploration of the wealth of historical information about the greatest evolution ever happened: the one of life on the planet Earth!

The cost of sequencing is expected to further decrease to get below 100$ in 4 years time and to approach 15-20$ by the end of this decade. That means that we will be sequencing all human genomes, and many millions of living beings genomes. That is bound to create a Big Data set (the human genome only requires some 2 GB of storage, but the correlations that can be made of the codons goes up to several TB, then you need to multiply by the number of genomes sequenced and their relationship plus create a timeline of evolution that can be computed out of these relationship....).

We will have to turn to massive ICT application to make knowledge emerge from this data set. New algorithms will need to be invented, new crowdsourcing approaches will be created to navigate into this data ocean. And the rewards is both an understanding of the past and, hopefully, a planning of the future.

Along with it expect novel ethical issues to emerge as we move into an unchartered terrain.

I will also expect plenty of new biz opportunities to emerge, both at the local and global scale.

At EIT ICT LABS we are working on some enabling infrastructures, like the Future Cloud (that includes work on making sense of Big Data), and some work being done in areas that seem to be quite far from the human genome, like crowd-sourcing for tourist applications in the context of EXPO 2015 may prove useful for application in this domain.