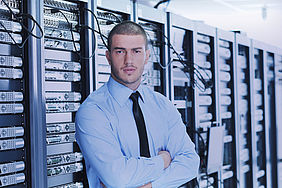 Is your company’s data safe on the Internet? A number of recent studies suggest that, even if you put protective measures in place, you should never take cyber security for granted.

In 2017, the UK Government’s Cybersecurity Breaches Survey 2017 found that almost seven out of ten large businesses in the country identified a breach or attack last year.

McAfee, one of the leading computer security companies, estimates that cybercrime annually costs the global economy between $445 billion and $600 billion (€380 to €512 billion)* in 2017, and this figure is expected to increase manifold as projections by Juniper Research lead to a staggering sum of €1,7 trillion by 2019**.

If you think that the threat has been inflated, think twice: consider, for instance, how the WannaCry virus hit last year more than 230.000 computers in 150 countries, affecting public and private institutions, including the UK's National Health Service (NHS), FedEx, Chinese universities and even the Ministry of the Interior in Russia.

If McAfee’s estimates are correct, this is just a small anticipation of things to come. Cyber security is a therefore a very serious issue, and one which cannot be solved only through technological means. To name yet another recent report, if an organization only used technology to fix its security vulnerabilities, it would only solve 26% of cyber-attacks.

The human factor is essential. Which means that, in order to keep their organizations well-prepared to prevent and act effectively against cyber-attacks, people who hold decisional roles in organizations - executives and middle managers - need to be fully trained to face even the worst-case scenarios.

Executive education programmes in cybersecurity are the right tool to achieve this.

That’s why EIT Digital, the leading organization driving Europe’s digital transformation, launched last week in collaboration with UC Berkeley the Cybersecurity 360 programme for Professionals which will rely on experts from Europe and the U.S. to provide cutting-edge information on the topic through a two-week face-to-face professional training for industry leaders.

Participants will learn about different kinds of cyberattacks and the risks they pose to their organisations. They will also understand fundamental cybersecurity principles and their application to key technical systems in order to manage security challenges and data privacy.

With this new transatlantic collaboration EIT Digital is once more delivering on its promise of keeping European professionals at the forefront in today’s fast paced digital world.

And join the conversation: #Cybersecurity360

*”The Economic impact of cybercrime – no slowing down” – McAfee, February 2018

**"The Future of Cybercrime & Security: Financial and Corporate Threats & Mitigation" – Juniper Research, May 2015