It’s old, it needs to be replaced! 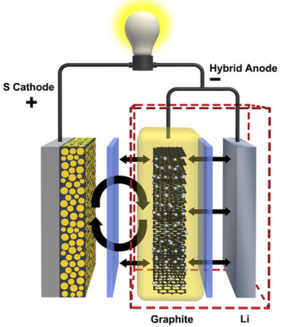 A hybrid anode made of graphite and lithium could quadruple the lifespan of lithium-sulfur batteries (credit: Huang et al, Nature Communications)

It might have happened to you: your car no longer starts and the diagnoses is: your battery is old, it has to be replaced.
This is quite normal. After a certain number of charge-discharge cycles batteries lose the capability to store energy. Usually they degrade genlty up to a point when there is not enough energy capacity left, and you get a problem.

Today’s cars need the battery for a fragment of their operational life, but if we are thinking about electric cars than the energy storage provided by battery plays a crucial role. And because of it batteries will wear out sooner and you’ll need to replace them at a faster pace, which is bad for the environment (pollution by waste) and for your wallet.

Hence the effort of researchers to look for technologies that can improve battery life time!

Those at the Pacific Northwest National Laboratory have come up with a way to quadruple the life time of lithium sulfur batteries by using a hybrid anode made of graphite and lithium.

The problem with the lithium sulfur battery is that the cathode slowly dissolves through a chemical reaction that creates molecules of polysulfides. These molecules moves with the electrons flow to the anode covering it with a thin film that insulates is and blocks further electron flow. Hence the battery stops working and you need to replace it.

So far it has been impossible to block this reaction; however, it is not the slow shedding of the cathode that stops the battery but the film forming on the anode! Hence, the researchers at the PNNL have tackled the issue at the anode side, by developing a shield made of graphite and lithium that effectively blocks the formation of the polysulfide layer on the anode. This has led to the quadrupling of the battery life.

It is interesting to notice how evolution moves in small streams that diverge and converge under the pressure of economics and market. Because of the large innovation ecosystem it is difficult to make specific prediction at the micro level over a long horizon. However, the general direction is quite clear. You see a meandering river, with many smaller streams flowing into, and with a few unexpected earthquake suddenly changing the local river flow. However, the see shores remains clear on the horizon: we are aiming at increased usage of renewable energy and technology evolution that improves energy storage from a performance point of view within economic affordability makes us progress towards the shore. We don't know exactly when and where we are going to reach it, we know it will be a lengthy endeavour that will likely result in several streams (technology solutions) reaching the shore at different times with different strengths. And we also know that ICT will be instrumental in this evolution at system level. In my opinion not as much as in increasing performances but in making the whole more affordable.