Is virtual taking us a bit too far? Virtual lemonade 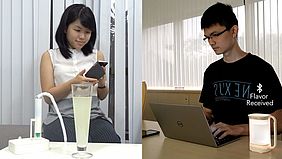 The pH sensor on the left is used to capture the flavor of a drink and transmit it to the tumbler on the right. Credit: NSU

Our capability of transforming atoms into bits has progressed tremendously, we have been able to digitalise almost everything, including emotions. There are applications able to "look" at a face and tell if that person is happy or sad and quantify, in bits, the level of happiness.

Much more difficult is the transformation of bits into atoms. Of course, from the very beginning of the digitalisation era we have had bits transformed into photons (in video screens), into sound waves (loudspeakers) and in ink on paper (printers). But these transformations, probably because they are so natural, are not really perceived as transforming bits into atoms.

In the last ten years the development of 3D printers has been impressive, and 3D printing is clearly the epitome of transformation of bits into atoms. They will progress even further and this may lead to a disruption in the way (some) products are designed, made and retailed.

There is another way of transforming bits into atoms, that is transforming bits into "virtual atoms", atoms that are not real but "feel" real. This goes though cheating our senses. Haptic interfaces cheat our sense of touch, leading us into feeling something that is not there, giving the feeling of texture, softness, even providing the sensation of wetness; holographic interfaces cheat our sense of vision, sound surround cheats our sense of hearing.

Cheating our sense of smell and taste has proven more elusive. In 2014 a UK inventor, Charlie Harry Francis, launched the Edible Mist Machine, a device that was able to re-create 200 flavours mimicking the ones of bacon, cheese... It was not particularly successful, yet it was an attempt to cheat our sense of smell.  There have been several other attempts (even before 2014) to re-create smell sensations but so far there have been no killer application in this area.

At NSU, the National Singapore University a team of researchers are studying ways to cheat our sense of taste by stimulating the tongue with electrical pulses that in turns activate the taste buds detecting sour, salty, sweet, umami and bitter.  Recently they performed an experiment to serve virtual lemonade. The goal was to cheat the taste buds of people drinking water so that they would think they were drinking a lemonade.

The experiment took into account also the visual perception of a lemonade glass (and of the one pretending to be). In fact, the visual aspect plays a significant role in our perception of taste (think about a dish being served in a top notch restaurant where the visual impact is high). To assess the effectiveness of tricking the taste buds of tested subjects the experimenters used a special glass with LED on the bottom to colour the water and provide a visual feeling of lemonade. It worked. Actually, by changing the colour, hence the visual perception, they changed the "taste" of the lemonade (in terms of perception, of course, but that is what really matters!).

In the case of the lemonade the most important "taste" is the sour one. Researchers are working to improve their wares with the goal of teleporting taste feeling over the web.
Not sure if there is a business for this. As they say, there is nothing like the real thing....