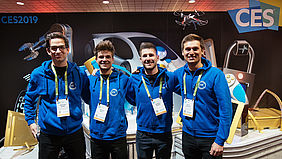 Winning hackathons seems to come naturally to Peter Lakatos and Gergely Bihary. Last year they and their fellow EIT Digital Master School students won the Junction Hackathon in Helsinki; they came first at the 2018 Global Legal Hackathon in New York, and in March 2019 Lakatos won a Belgium hackathon with another master school student team. Two of these led to offers from incubators to develop the winning ideas further. Both incubators have to wait - school comes first; and besides, two team members already have their own post-hackathon businesses to run. How do hackathons open doors, and how did Lakatos and Bihary end up at the Mercedes booth at CES Las Vegas?

Some friends just hang out at weekends. Others, like the three first year EIT Digital Master School students Peter Lakatos (Data Science at Eindhoven University of Technology and KTH) Gergely Bihary (Cloud Computing and Services, Technishe Universität Berlin and Aalto University), and Márton Elődi (Human Computer Interaction and Design, Aalto University and KTH) prefer to spend their time cracking cases at hackathons. They have been to seven in the last three years.

They have known each other since primary school, they went to the same secondary school - and now study in different  EIT Digital Master School tracks in different places. Hence, attending hackathons is great way of meeting up with each other, Lakatos says. "Not to mention that these hackathons always open many doors for us."

Junction, the largest European hackathon, last held in Helsinki in November 2018, is an example of how this team got to open doors. Bihary, Elődi, Lakatos, and a fourth Hungarian friend, the aspirant EIT Digital Master School student Kristóf Nagy, picked from the hackathon's list of 45 challenges the world's biggest manufacturer of commercial vehicles, The Daimler Group. This challenge was about finding a way to travel as seamlessly as possible through Europe in a smart electric car.

According to Lakatos, most participants start coding as soon as they find their challenge. The veterans chose a different approach. They walked around among 1200 other Hackathon participants and partners, and found themselves two other interesting challenges: Ensto was looking for new markets for electric chargers, and Mobile Pay wanted to find new forms and payment use cases for their service.  They then decided to combine smart mobility, electric charging and mobile payment into one solution and took time to braindstorm. "We were taught at the EIT Digital Master School that we need to find solutions to problems that truly exist. Hence, we spend a few hours on brainstorming and talking with experts. Basically, this is the most fun part of the hackathon, we laugh a lot."

Finally, the hackathon crew - calling themselves now ‘Discover' - came up with a new service model of Smart Points of Interest (PoIs), with charging and paying as an integrated service. This ecosystem is similar to an app store, Bihary and Lakatos explain. But, instead of uploading apps as a developer, providers can upload integrations within the Daimler ecosystem, to give PoIs additional functionality.

For electric car drivers, this means seamless driving through Europe. They can control all kinds of services with these integrations via their dashboard. The car checks the electricity status in the background, and automatically makes recommendations - like finding and booking a spot at the nearest charge station when the battery is running low. The driver can charge, pay automatically, and move on. The system can be extended with all kinds of car-related services, such as ordering and paying for food at drive-through restaurants, finding and paying for space at parking garages and so on. "We presented a prototype solution that could, if implemented at scale, radically change the landscape of connecting smart vehicles to their environment," says Lakatos.

It paid off. The team won the first prize in the Daimler competition: a factory visit in Stuttgart plus tickets for the Berlin Tech Open Air Festival that takes place from 2 to 5 July 2019. And they came second for the electric charger challenge.

Two weeks after the Junction hackathon, out of the blue, Daimler invited the boys to present their solution at its booth at CES 2019 in Las Vegas, where Daimler was one of the 4,500 exhibiting companies. Lakatos remembers: "The company was thoroughly impressed with our teamwork, our solution and our presentation skills. You can imagine what a wonderful opportunity it was for us students, to travel to the heart of the IT Economy not just as visitors, but as presenters."

There was just one small problem: Daimler had only two plane tickets available for the team of four. "Luckily EIT Digital sponsored the other two tickets," says Bihary.

The experience of being at CES, the largest consumer electronics expo in the world, with over 180,000 people from 155 countries was amazing, say Bihary and Lakatos in unison. Bihary recalls that "Mercedes had a 2000 square meter booth, and we got the chance to demo our solution to CES visitors. And we pitched on stage. It was really cool."

On top of the invitation, Daimler asked the students if they would be interested in further developing their solution in the startup incubator digital life department at the Daimler Group. The students had to decline. "I already have a startup," says Bihary. Also Elődi is co-founder of the startup Vern Insurance Technologies. Hence, the team members are speaking to Daimler experts about if and how Daimler can implement their solution. "Daimler is working with us to figure out how they could implement the idea."

The startup Bihary is referring to, came out of the 2018 Global Legal Hackathon. For this, the hackathon crew members, plus Bihary's brother, a lawyer flew to New York to win the finals. Their solution was based on the privacy regulation (GDPR) that had just come into force. This solution, Bihary, Nagy and his brother moved forward to the foundation of the startup Revealu.

The goal is to make it simple for people to access - or ‘reveal' - their digital footprint, and for businesses to handle the GDPR processes. "Since GDPR, European citizens have the right to access personal data that companies hold about them. On Revealu they can request this data, turn it into a digital visualisation, and modify and delete data. Our business-to-business software helps companies to keep track of requests and connect their internal data sources - to make the process completely automatic."

Revealu was launched in the summer of 2018. It is now being incubated in the KBC incubator K&H Start-it in Budapest, is in the middle of an angel investment round. Bihary hopes to raise 120.000 euro. From its origins in Central Eastern Europe, Revealu is planning to grow first in Europe and then in California in early 2020, when privacy regulations come into place. "We want to be there then."

Bihary expects his startup to grow from four to ten people this year. By that time, he hopes to qualify for admission to the EIT Digital Accelerator, to help his startup to become a successful European unicorn.

While the spinoff of the Junction hackathon is still ongoing, Lakatos has found a new challenge.

During the entrepreneurship courses this team already had good team dynamics, says Lakatos. "We wanted to challenge ourselves outside the university too. We learned about the hackathon online, signed up for it, got accepted and ended up being the overall winners of the entire competition. The brainstorming techniques learned in our courses prior to the hackathon were still on top of our minds during the competition, and proved to be quite helpful."

Their idea - a gamified ‘Spot a stranger' app - is quite simple, he says. "International students usually do not mix with local students. We, for example, do not meet Dutch people outside our courses. The app shows a profile with pictures of a person, who is in close proximity like the library, park or café. The mission of the user is to find this person in real life. It is a fun adventure to meet new people."

However the prize, a three-month incubation programme at Tobania, had to be declined. It would not have been feasible with their studies in Eindhoven. There are other ways to develop the idea further, says Lakatos. "The TU/e has a contest for emerging startups. Who knows, ‘Spot a stranger' might grow to be our own company." Also, Lakatos is thinking about joining the new EIT Digital 2020 programme. We experienced that both the EIT Digital community and the Alumni community are very active, multinational and diverse. We see a lot of potential working with these communities."

The experience of being at CES, the largest consumer electronics expo in the world, with over 180,000 people from 155 countries was amazing, say Bihary and Lakatos in unison.