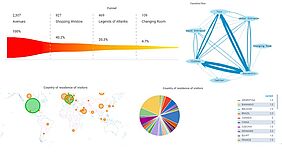 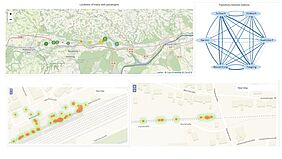 In 18 months, with support from EIT Digital, the startup Ariadne Maps has succeeded in signing up big clients like Singapore Airport as well as Edeka and MVV in Germany. It is also expanding its professional relationship with Deutsche Bahn, which is now using Ariadne Maps’ technology across an entire railway line.

Brussels, 10 November 2020 - From Singapore Airport to the Munich Transport and Tariff Association (MVV). From German supermarkets and shopping centres, to the leading DIY and home improvement chain in Greece. Ariadne Maps’ technology is being deployed all over Europe and beyond.

Launched just eighteen months ago, the startup has developed a technology that allows physical-business owners to anonymously analyse people's movements indoors with an accuracy that is up to two orders of magnitude better than GPS. The solution captures the signals smartphones send on different frequencies (GPS, Wi-Fi, GSM, Bluetooth) and uses them to detect people’s movements and location.

The technology was developed as part of the “People Movement Analysis and Optimisation” innovation activity, belonging to the Digital Tech portfolio of the EIT Digital Innovation Factory, and is being deployed across several industries, such as retail, transportation and hospitality.

In the retail sector, location data can be used by stores to optimize almost every aspect of their operations - from staff scheduling to product placement - and to better understand the customer journey inside the company’s premises. Retailers like the Bikini shopping centre in Berlin, are leveraging the startup’s extremely accurate tracking of people’s movements to find out in front of which store and which products people dwell the most, which in turn enables businesses to optimize their layout and their offering.

In times of a pandemic, Ariadne Maps’ tracking technology can also be used by merchants to enforce social distancing in their point of sale, monitoring crowds and preventing people from staying too close to each other. “Edeka, the largest supermarket chain in Germany, asked us to deploy our technology in one of their point of sale precisely for that purpose,” Ariadne Maps’ CEO, Georgios Pipelidis says.

Indoor location tracking can also provide valuable information in the transportation sector. In the case of an airport, like Singapore Changi or London Heathrow, Ariadne Maps helps managers understand how much time it takes passengers to reach the departure gate, from the moment they enter the airport, so that they can identify and remove bottlenecks.

In bus and railways stations, being able to track passengers’ journeys without invading their privacy, as all the data is anonymized, is an extremely valuable asset for transport operators.

Deutsche Bahn, the German railway, signed a contract with Ariadne Maps last year to monitor people movements in a single station. “Since then, the deal has been extended to analyse data from all stations along the Mühldorf-Laufen train line (until the Austrian border). We’re discussing a further extension to other 300 stations,” Pipelidis says. This will help the German railway company solve a longstanding issue that affects stations located at German borders: how to differentiate between passengers who are continuing their journey, or staying in town. This is valuable data, given that, when a single ticket is used by a commuting passenger, revenue sharing between railway companies of different nations (or between different companies of the same nation), depends on being able to identify and track a traveller’s journey.

In the hospitality sector, the startup’s technology can help hotel managers see at a glance how the flow of guests is spread across a certain timeframe, and in which common areas. This is especially valuable for large buildings, hosting hundreds of guests and containing sport and wellness areas, stores and other facilities; by leveraging this information hotel managers can, for instance, minimize the queues in certain areas, such as the food counter, allocate their staff where they are needed the most and clean their spaces not based on hourly schedule, but on use frequency. Ariadne Maps has signed deals with hotels in the Emirates, such as the Atlantis The Palm Hotel in Dubai.

In addition to the above successes, the startup is adapting its technology so that it can be exploited in other sectors, such as automotive. It will be optimized so that it can gather signals coming from cars in parking places, to analyse occupancy and flow rates. Ariadne Maps’ exciting journey has still a long way to go.