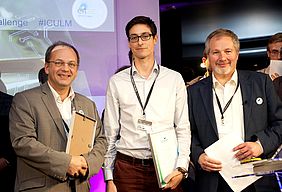 Yespark - Second prize in the Urban Life and Mobility category 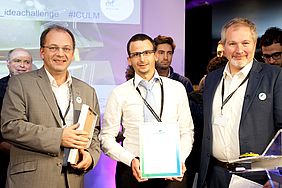 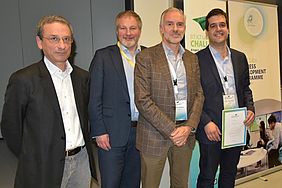 Sentryo - Third prize in the Cyber Security and Privacy category 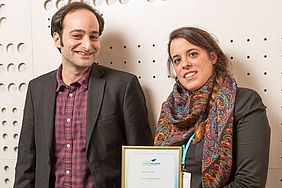 Sensewaves - Third prize in the Internet of Things category

With 4 awards and 70 K Euros prizes, French start-ups are big winners of the second wave of the EU wide contest Idea Challenge.

The Idea Challenge contest is organised by EIT ICT Labs. It is aimed at European start-ups created less than 3 years ago. Their activity must be related to 1 of the 8 innovation areas covered by EIT ICT Labs. In 2014, the contest was divided into 2 waves - March-April and September - each covering 4 innovation areas. In order to participate, the start-ups submitted on-line their idea and business model. Area experts rated each and every idea so as to select 10 finalists. Those lucky and talented start-ups pitched their project so as to convince an international jury, in 8 European cities.

For each innovation area, the 3 best projects were awarded not only financial help (first prize 40 K Euros, second prize 25 K Euros, third prize 15 K Euros) but also resources to develop their business (coaching and mentoring by Business Developers, integration into pan-European partners network and activities of EIT ICT Labs, office space for 6 months in the European country of their choice).

With 86 submissions out of a total of 790 EU wide, France presented 11 finalists in 7 innovation areas. At the end, 4 French start-ups were awarded (the largest number), winning a total of 70 K Euros prizes (the second largest amount behind Italy) out of 640 K.

"This prize will allow us to scale up by investing in new parkings. Idea Challenge is an excellent contest which should be known more. I encourage other start-ups to participate into the next waves", says Thibaut Chary, co-founder and CEO of Yespark.

This wave in particular represents a great success for French start-ups.

The contest will be re-conducted in 2015. Please stay tuned!

Second prize in the Urban Life and Mobility category received by Thibaut Chary, co-founder and CEO of Yespark (application that lets the users find and book a parking spot in one click and at low cost in Paris). View Yespark pitch video.

Third prize in the Cyber Security and Privacy category received by Thierry Rouquet and Laurent Hausermann, co-founders of Sentryo (solution that protects critical industrial networks against cyber attacks and provides network managers with full awareness over the situation). The start-up is located in Lyon, France.

Third prize in the Internet of Things category received by Fivos Maniatakos, co-founder and CEO of Sensewaves (solution that makes connected assets smarter by transforming raw sensor data into meaningful information). The start-up is located in Paris, France.