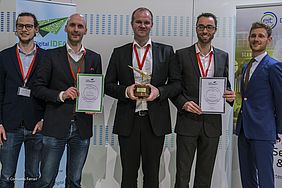 The Idea Challenge winners in the category Cyber Security & Privacy 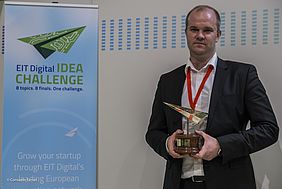 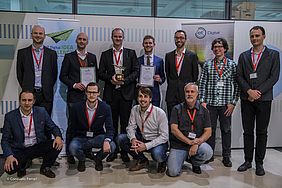 For the first time in Idea Challenge history a start-up from Estonia receives the first prize in the pan-European contest. The start-up DigiFlak wins Gold for their “Flak Secuters”, followed by Mynigma from Germany and Coblue from the Netherlands.

The Flak Secuters developed by DigiFlak are highly innovative all-in-one devices that secure and protect the entire internet life. They are based on a dedicated Flak chipset hardware and SecuritOS firmware and are designed to protect the sensitive data of both end users as well as companies.

Mynigma from Germany, who won the second prize, present an email app with built-in encryption called M – Safe Email Made Simple. While common methods of encryption only protect data in transit and leave them stored as plain text on the servers connected to the internet, M uses end-to-end encryption ensuring that the content of messages never ends up on the Internet.

The third place went to Coblue from the Netherlands who develop the secure cloud solution Storro. It allows users to share, adapt and save files while giving unprecedented data control and protection through a unique combination of compartmentalisation, encryption and decentralisation.

The winning teams will not only a receive a cash price but also get access to EIT Digital’s pan-European innovation network and international growth support through the EIT Digital Accelerator.

The three winners of the Idea Challenge in the category Cyber Security & Privacy are: