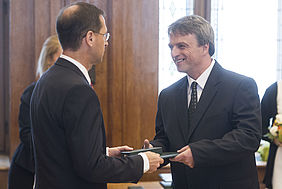 Prof. Zoltán Horváth, Dean of the ELTE Faculty of Informatics, Head of Department, visiting professor of  Babes-Bolyai University in Kolozsvár, has received the Knight's Cross from the Order of Merit of Hungary  from the President of Hungary. Zoltán Horváth receives the award for the internationalization of Hungarian IT higher education, the establishment of the EIT ICT Labs' Co-location Centre in Budapest, the furthering of the intensive cooperation between cross-border Hungarian-language IT higher education institutions and for his tireless teaching activities.

“This is the recognition of the high standards of teaching and research going on at the Faculty of Informatics and the expert team working on the successful establishment of the EIT ICT Labs Budapest Associate Partner Group." - said Zoltán Horváth after taking over the medal from the Mihály Varga, Minister of Economy.

The only Central and Eastern European member of the network is EIT ICT Labs Budapest Associate Partner Group, led by Eötvös Loránd University and the Budapest University of Technology and Economics, as well as the domestic subsidiaries of Cisco and GE. It aims to strengthen domestic and regional research and development activities, building on existing synergies between universities and large businesses.

To reach this goal the institution aims for an integration of cooperation with international education, research programs and business life. EIT ICT Labs Budapest Associate Partner Group launched a HUF 1 billion research program with the support of the Hungarian Government, the Research and Technology Innovation Fund, and the National Development Agency until the beginning of 2014.  The research program managed by the consortium made up of ELTE, BME and  Cisco, in four topics, and 18 sub-projects.

Prof. Zoltán Horváth graduated in 1986 as a teacher of mathematics, physics and computer science and received his Ph.D. in 1996 from the Eötvös Loránd University. He has been teaching at the university since 1986, and is currently the Dean of Faculty of Informatics and Head of the Department of Programming Languages And Compilers of Eötövös Lorán University. Before he was appointed as Dean, he was Vice-Rector of the university's international affairs since 2010. In 2002 he won the Informatics Teacher of the Year from the IT Leaders Association, between 2003 and 2006 he received the Bolyai Research Scholarship, has been awarded the Master Teacher OTDT Gold Medal in 2009.The CEEPUS network led by him, won the CEEPUS Minister Price in 2004 and in 2007. He is Chairman of the Committee of the Hungarian Rectors' Conference on Information Sciences.