Green PI deployed in Meaux in partnership with Orange 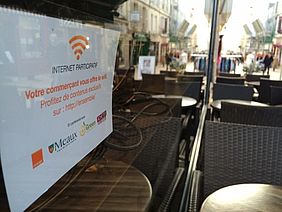 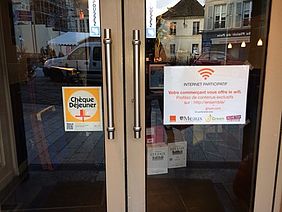 Green PI, the Participatory Internet developed by our coached start-up and partner Green Communications, is currently deployed in the city of Meaux for the "Meaux & Merveilles" fest from 4 December 2015 to 5 January 2016.

Green PI, the Participatory Internet developed by Green Communications, is an innovative and affordable solution for cities and large public venues that copes with infrastructure overload thanks to the support of participants (e.g. citizens, spectators, merchants).

In the city of Meaux (France), during the "Meaux et Merveilles" fest from 4 December 2015 to 5 January 2016, Green PI is deployed thanks to the voluntary participation of merchants. They provide visitors with Wi-Fi hotspots by simply hosting a YOI box, the Green Communications Wi-Fi router, in their stores. In return, they get their own information emphasized on the local Internet stored directly inside the YOI box.

The operation is organized in partnership with Orange, the City of Meaux and Green Communications.

A Participatory Internet can also be created by spectators inside a stadium or the audience during a festival. There, Green PI becomes an efficient high density Wi-Fi Infrastructure that connects the crowd.