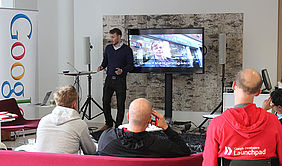 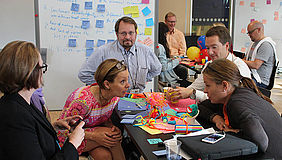 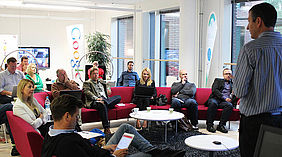 EIT Digital’s co-location centre in Espoo, Finland, was happy to host Google events during the first week of September when the first ever Google Launchpad Week in the Nordics took place. During the week also three Google-style Innovation Jams were organized. “We chose to organize the Launchpad Week in Finland because it’s an exciting market, has great developers and success stories around startups,” says Robert Nyman, Developer Relations Program Manager, Nordics at Google.

The Google Launchpad Week is a one week acceleration program for early stage startups taking place in key locations around the world.  Previous Google Launchpad Weeks in Europe have included Tel Aviv, Barcelona, Berlin, London, Paris as well as Launchpads in South America and Asia.

“We believe it’s vital to support and help the local startup ecosystem to grow. Our role is to help and facilitate people to create better things. By working together with mentors and startups, we create a 2-way understanding of needs and challenges and relations for future collaboration,” explains Robert Nyman from Google.

After careful screening a total of 13 startups were selected to participate in the Google Launchpad Week in Espoo including Lukoton, Funzi, Nimble Devices, Spacemaker and ELL-i that all belong to the EIT Digital network as well as Cookoo Workout, Soundshade Neonto, Rounders Entertainment, Viima, Dispelix, Meiku & Me and stone edge.

Google brought in mentors from Israel, Spain, UK, Denmark, Germany and Sweden along with the 25 local mentors in the areas of product, UI/UX, technology, marketing and presentations. Each day of the week had a certain focus and mentors from this area shared with the startups both one-on-one and in groups.

“We were amazed about the amount of new contacts that the Google Launchpad Week triggered for us, and still counting. The days were open enough to fine-tune the content with the inspiring mentors. One of the mentors was able to change our carefully planned business model, save our marketing euros, implement “Lean Startup” thinking to our projects and catapult our already high clock speed several levels up. Thanks to #Paavo, #EIT Digital and #Google!” states Ari-Pekka Hietala, CEO of Lukoton.

Innovate with speed through experimentation

The Google Innovation Jams were run by Dr. Frederik Pferdt, the Head of Creativity & Innovation Programs at Google. In these highly interactive workshops the participants learned ways to successfully innovate with speed through methods of experimentation. The method includes having the mindset of a child, which besides being proud of your work means the ability to start doing instead of long planning.

“We at Nimble Devices especially enjoyed the Innovation Jam organized by Google’s own Dr. Frederik Pferdt, which efficiently demonstrated one example of how companies can foster innovation in a directed, results oriented manner,” says Mikko Virkkilä, CEO of Nimble Devices. Mikko and his team were very satisfied with the Google Launchpad Week. “Nimbe Devices’s indoor positioning is often used in creating innovative mobile apps, so naturally the day about creating superb user experiences was of particular interest, and we were definitely not let down by the high quality of the presentations as well as the wonderful local mentors,” Mikko continues.

The Google Launchpad Week was organised in cooperation with Espoo Innovation Garden.