Getting a little help ... from AI 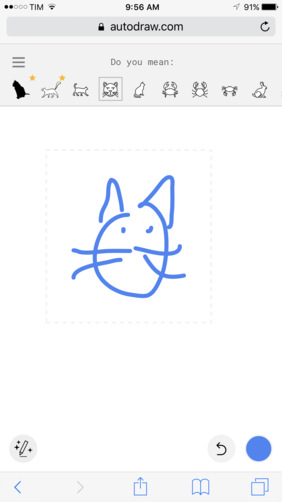 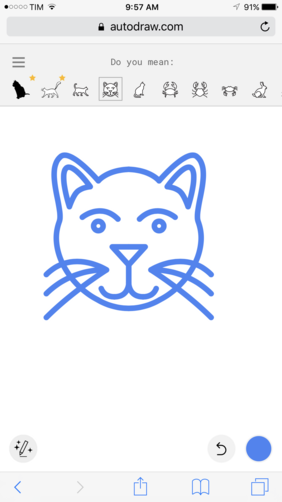 And this is Autodraw recognising that it was a cat and giving me a little help in polishing up the drawing. Cool, isn't it?

I don't know about dogs or other animals but humans have an uncanny ability to recognise "things" in shapes found everywhere. Ever saw a cloud reminding you of a face, of a horse of a... whatever. Yes I am sure you have.

Yet recognising shape is really tough for computers, so tough that image recognition has been a sort of holy grail and a test for computer smartness.

Now we have available (for free!) a service from Google to help us drawing images on our computer, tablet, phone...You draw a sketch of what you have in mind (see the masterpiece I draw, first figure) and Google recognise your chicken scratch and suggests some interpretations. You click on the one you want and ... voilà, there is your nice drawing (see the second figure).

The magic is in the capability to interpret a few lines as a representation of an object. This is done using some sort of artificial intelligence. More specifically, Google is saying that they use machine learning, which is a great trick because the application will keep learning, and getting better, the more it is used.

Google started releasing some games in November 2016 that actually helped in training the application. This is really smart if you think about. You create a learning machine and let it go free to learn. Potentially all of us become teachers, and the more teachers there are the faster and the better the application becomes. It never tires out of learning (it is not like us that very soon would lose drive and focus).

If you try it out I am sure you will love it, but as you get entertained just pause a bit to think at the amazing intelligence that is supporting this apparently simple application. There is nothing so difficult to recognise that I meant to draw a cat, isn't it. And yet it was simply impossible for a computer to do that just few years ago. This is marvellous and scaring at the same time. We are entering a time where computers can be as good as we are in many practical, everyday things ... just way better.