G-Moji, a digital companion to help teens in therapy visualize and understand their emotions 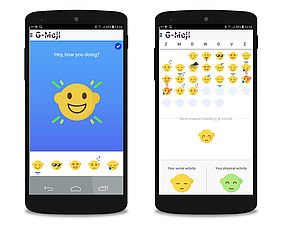 In some cases, typically when parents are in debts, violent, sexually abusive or have an history of addiction, out of home placement of young people can be a necessity or, at least, the lesser evil.

But it comes at a price: living away from home can badly affect a child, leading to depression, suicidal tendencies and other behavioural problems. That’s why G-Moji, an EIT Digital supported innovation activity for Digital Wellbeing, was created.

“We started G-Moji as an extension of another project at Garage2020, aimed at finding out of home placement alternatives” G-Moji’s project lead, Laurens de Knijff explains, “Garage2020’s founder Levi van Dam initiated a successful youth care innovation called Youth Initiated Mentoring (YIM), which focuses on reducing psychological and behavioural problems by increasing the resilience of the child and his or her family.”

In YIM, the youngsters nominate a neighbour or a friend who will act as a confidante or spokesperson for them and a cooperation partner for parents and care professionals. “What we realized is that we could not only provide a physical version, but also a digital version of YIM to serve as a mirror for the teenagers and a way to stimulate their self-management.”

The team at Garage2020, the Dutch youth care innovation lab, which leads the activity (partners include CWI - National Research Institute for Mathematics and Computer Science and Universidad Politecnica de Madrid) developed therefore a smartphone app to serve that purpose.

The app, which is available only on the Android operating system at the moment, uses emoticons to help youngsters understand and visualize their emotions: every day it asks them how they feel and prompts them to choose from several ‘faces’, corresponding to different moods.

This gives teenagers a way to reflect on their own well-being.

During the day G-Moji keeps working in the background, constantly monitoring smartphone usage: anything from calls, messages or online searches, to battery drain or screen locking.

“We do not access the content itself of these interactions, but the metadata instead: for instance, how many calls are done and for how long, how much the browser is used, how many times the You Tube or Facebook app is launched and so on,” De Knijff says.

Metadata might not tell the whole story, but they do reveal a lot about the adolescent’s condition. For instance, poor quality sleep can be assumed if the smartphone is frequently accessed during the night; a small number of calls and messages is usually a sign of poor social relations.

“Some patterns are clear; others vary a lot depending on the person. We discovered that we need at least three or four weeks to calibrate the system on your own data.”

The app has been trialled in three different pilots. The first took place one and a half years ago, with a small sample of 30 users, with the purpose of collecting feedback and fine-tuning the app’s features.

A bigger test with 500 kids who used the software on a daily basis, was carried out at the beginning of 2019, as part of EIT Digital’s G-Moji innovation activity, resulting in the creation of a large dataset from which to extrapolate useful patterns. By analysing the teenager’s behaviour through the app, ideally it should be possible to detect ‘warning signals’ of depression and automatically schedule an appointment with the therapist.

“The way it works now, children have an appointment every week, when there’s a slot free in the caretaker’s agenda. What we are looking for, is for it to be driven by the need of the youngster, rather than the therapist's diary,” the project lead says.

The sample included young people from different backgrounds, aged 16 to 24,  who were recruited through a nation-wide advertising campaign on Dutch TVs and newspapers. “The campaign was a huge success: over a thousand youngsters applied, but we could only reach half of them, as the others were iPhone owners and G-Moji is not available for iOS yet,” De Knijff says.

The third pilot, currently ongoing, was started in collaboration with G-Moji’s fist customer: Bascule, the Dutch academic centre for children and youth psychiatry, and is targeting young people with mental health issues and professional therapists.

The plan next year is to sell the service to other youth care organizations in the Netherlands. Insurance companies tackling mental health issues could also be interested in G-Moji’s proposition.

And Garage2020 plans to expand to other national markets in the near future, namely Germany and Spain.