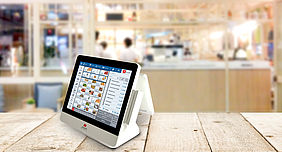 The Cash Register 4.0 will streamline operations, by providing a single touch point for all retail tasks.

Just imagine having a queue of customers waiting at the cashier in your brick-and-mortar store, and being able to deal with each transaction in just a few seconds, instead of minutes. How would you like that?

The Cash Register 4.0 (CR4.0) innovation activity, promoted by EIT Digital as part of the Digital Industry focus area portfolio, will allow merchants to do exactly that - and much more. The initiative is led and developed with the technology and know-how of the Italian company Olivetti and the support of the University of Helsinki and TIM.

Its main product, the register, will perform all the main functions of a cash register - invoicing, receipts, etc., but it's also set to become a digital retail hub, a machine that could streamline and make life easier for thousands of small to medium-size retailers.

Based on the Android operating system, and similar in look to a high-end computer or tablet, CR4.0 will offer merchants a single entry-point to manage many digital services and also backend operations. In Italy alone, there are around 1.3 million cash registers; almost 90% of this market, according to the company, could potentially be targeted by the Olivetti solution.

Say, for instance, a customer wants to pay with an M-Payment App: usually the merchant would have to accept the money via smartphone, but that is not always convenient, as the device could be unavailable, out of battery, or busy for a call. The Android-based machine gets rid of all these issues. It can also support bitcoin payments, automatically transforming the virtual currency amount into its equivalent in euros.

In another possible scenario, a restaurant willing to accept orders from food delivery services would have to equip itself with different devices for each supplier and handle the process separately.

The Cash Register 4.0 will streamline operations, providing a single touch point for all of these tasks. It could even communicate with the fridge, to check which products are in store, which need to be bought, or automatically return and dispose of expired food.

"Some of these features, like the one on food waste, will be available only in the long-term, but for others, like receiving an alert when a fridge is broken, or being informed of its content, things are moving fast forward," Marchesi says.

From the register, a retailer could even control which music is played in the store by choosing, from a selection of playlists compiled by expert DJs, the one that fits best the overall look and feel of the business.

A "naked" version of CR4.0, with only the traditional cash register functions, will be launched in Italy and France during the first half of the year, followed shortly by the Olivetti App Store launch. In the second part of the year, fully fledged entry and mid-level models of the product will be launched across Europe.

Those models will include a series of pre-installed, must-have apps, but the App Store ecosystem will be open also to external, independent developers: to discover the best ideas and integrate the most exciting solutions, a series of hackatons is being organized in Italy and Finland, with a first occasion scheduled for 14-15 June in Milan.