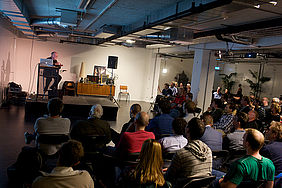 The Friday Afternoon Lecture as given by Ivan Sutherland last September 20 was well visited by the EIT ICT Labs  Master School students. The lecture was livestreamed and counted 192 visitors as well. Arjun, one of the Master School students wrote: 'Ivan Sutherland wore a T-shirt that said "Do you have change for a paradigm?" and that is exactly what each one pondered about after his presentation. He started with a brief introduction of himself with a video showing how he had invented the sketchpad which went on to be the starting point for GUI as we know now. He progressed explaining how computers have evolved over the years with a nice touch of philosophy and humour. We were introduced to his research area of asynchronous systems where systems do not work with a fixed clock unlike the systems that we see around us today. He believes this is a paradigm that can impact the computing world immensely in the coming years. He ended with an amazing gesture of wearing a chain made of LED`s acknowledging Eindhoven, the city of light and home of Philips. As students it was great to be in his presence as he was inspiring and enlightening.'

Next to this Master School student Mohit declared: "I must say that I enjoyed every second of it. It was insightful and along with me I hope, it was an inspirational hour for everyone who attended wonderful conglomeration of the best minds. Please do keep organising these lectures as I truly believe these indigenous thought could make a huge impact on the curve of the upcoming researchers."

For those who were not able to watch teh livestream, there is a chance to catch up on this lecture. The video is on line