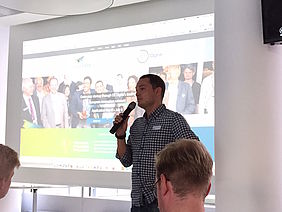 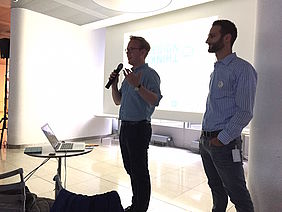 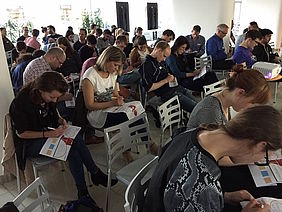 On June 25, EIT Digital Germany organised another instalment of it’s “Founders’ Pit Stop” event series – this time in cooperation with SAP, one of EIT Digital’s core partners and the Berliner Ideenlabor – on the hot topic of Design Thinking.

More than 60 people gathered at SAP’s Berlin Mitte office where the event took place – amongst them many entrepreneurs who were keen to learn more about this creative method to develop human centred innovations. Dominik Krabbe, Innovation Manager at EIT Digital, opened the event with a short introduction of EIT Digital and the Idea Challenge.

The official program was then started by Thomas Thome, Designer and Design Thinking Coach at SAP, who introduced the company in a brief presentation and showed how Design Thinking is implemented in the structure and working processes of the software corporation. He was followed by Ignatz Schatz, Startup Engagement Manager at SAP, who gave the attendants a short intro into SAP’s Startup Programs.

After the participants had learned about the basic concept of Design Thinking, and how it was used at SAP, it was time to get active. Pascal Ackerschott, Co- Founder of the Berliner Ideenlabor, started his workshop with a warm up, that required everybody to get off their seats and move around the room for a couple of minutes, while following orders given by the coach.

Now everybody was in the right mood to start practicing Design Thinking hands on. In teams of two, the participants had to “Redesign the networking experience”, taking into account the personal preferences and experiences of their team partner. They had to interview each other, dig deeper, brainstorm ideas, present them, iterate them again, and after 90 minutes, tell their team mates about the final concept they developed. To facilitate the process, Pascal Ackerschott used the SAP Design Thinking Leporello (can be downloaded here), so everybody could take the results back home.The event was concluded with a get-together and networking with beer and pretzels, and the participants made full use of the opportunity to get in touch with the coaches and other participants.