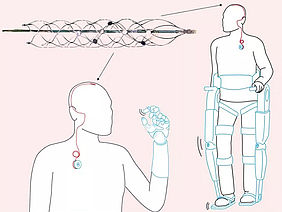 A stentrode can be injected in an artery and pushed to find home in a capillary of the brain. Credit: Melbourne University

The recent launch of Neuralink by Elon Musk, a company whose business is connecting brains to computers, has created quite an excitement in the scientific community, not because scientists feel that they will succeed anytime soon, the problems that remain to be solved are huge, but because Elon Musk has a knack for creating innovative, and successful, business. His strive in this area is a signal that technology is reaching a maturity point, it is no longer a lab affair.

Elon Musk, in a conference speech in 2016, spoke about the possibility of creating an interface made by Neural Laces, overlaid on the brain cortex but it did not provide any details on how to do it nor on what a Neural Lace might be.

An interesting article on IEEE Spectrum is making a point on the most advanced technologies to interface with a brain. I already blogged on a few of them in the past.

The basic problem is how to be able to capture the activity of the brain with accuracy and with minimal noise (generated by activities in nearby areas...) and remain as less invasive as possible from the point of view of the brain. Work is progressing in finding materials that are not perceived as foreign bodies by the brain, that can gently move as the brain moves and yet keep their position. Notice that even if this is achieved the brain is a dynamical structure, continuously reshaping itself. Hence, if you have a probe in just the right place to capture the activity of that precise neural circuit related to -say- the analyses of depth in an image, in a while that activity may shift to a different part of the brain and your probe is no longer useful.  The more you are interested in high level activity, thinking, the more dynamical structures are. On the contrary, if you are interested in some motor action you can pinpoint places that are responsible for instructing muscles to move and these are much more stable.

One that I found really interesting is the use of stentrode, a probe invented at the University of Melbourne, funded by DARPA (watch the clip).

The stentrode is a ... stent. It can be inserted in an artery and pushed to a specific location, a capillary in the brain. Being a stent it does not block blood circulation, quite the contrary, it slightly widens the capillary to let the blood flow through. It can detect electrical activity in the surrounding and can transmit the data gathered to an external monitoring device.

In a way it is much less invasive than a normal probe in the brain since it does not touch the neurones nor cause any damage in being positioned, but is as effective as a needle like probe in terms of detecting electrical activities is nearby neurones.

The way is still winding and there is not arrival point in sight but clearly several, important, steps have been made and the commitment of Musk to this area will likely bring an acceleration.