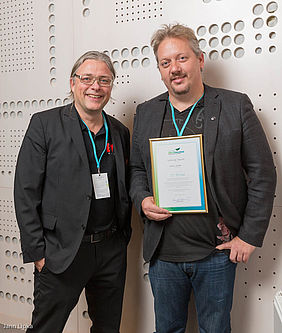 The team behind Evothings is an experienced group of entrepreneurs, developers and experts in mobile development and at connecting mobile devices to other things. Their passion is simple - wanting to improve, refurbish, evolve and augment buildings, vehicles, appliances, industrial applications, gadgets and/or other connected things – to make them smarter by becoming more connected.

Things are so much better when they are connected

Web developers, tinkerers and makers who want to create mobile apps for hooking up phones and tablets with connected things, can do so much easier with Evothings, an open source tools company. With Evothings Studio, developers with web skills can use HTML and JavaScript to make real apps for Android and iOS. Focus lies on applications where the phone controls and monitors microcontrollers, home automation, wearable sensors, industrial hardware, dev kits et cetera. The rapid build process of Evothings allows live updating of apps during development and testing – perfect for mobile service creation, prototyping and testing with customers in the field.

Founder and VP Community Dr Alex Jonsson and CTO Aaron Ardiri are part of the FNS business community going to the Mobile World Congress 2015 on March 1-5 for meetings with potential clients and collaboration partners.

We have found a niche between the huge mobile industry and the growing IoT industry, where many players need to build and provide applications and mobile services for their products. General Electric is a good example, who claim to have customer needs today forming a backlog of thousands of apps, and in dire need themselves of a efficient way of creating these services, rather than making native IoT apps one by one for each platform.

We currently collaborate with Texas Instruments, Intel and ARM and many other players in providing development tools for their hardware, targeting web developers, smaller companies, makers and tinkerers and others who want to get into IoT and mobile.

At the MWC, it’s mainly hardware companies and system integrators, companies such as Samsung Electronic, Qualcomm, Broadcom, Atmel and Toshiba who are the kind of partners we are keen to meet with. At the moment we have some national seed funding in place from ALMI Invest along with private investors, and as our production has been going well are beginning to look for further investment opportunities.

Founded in Stockholm, Sweden, with a research base at KTH Royal Institute of Technology , Evothings are connected to EIT ICT Labs in several parts of the community. As a subgrantee, they have been involved in research projects relating to Collaboration tools for Smart Spaces (link to demo) and piloting at Ericsson using sensors to get data on how spaces are used in office buildings – of great value to users, and also to property service managers, organisational planners, human resouces et cetera.

In 2014, Evothings participated in the EIT ICT Labs Idea Challenge on the theme »Internet of Things« and were awarded second prize! Part of the Idea Challenge prize is an opportunity to expand to other parts of the European market. In the Spring of 2015 a guest researcher from Trento will be visiting KTH and the start-up community at Things. Later on Evothings are considering a longer stay in Italy to explore the opportunities there, as many Italian companies have shown interest in the Evothings portfolio.

Today, we offer a basic, open source version of Evothings Studio that can be used by anyone without charge, later this quarter we launch our enterprise version called Evothings Secure. It focuses on providing for industry-strength security across the delivery chain, in addition to everything in the basic package. In the commercial offering we also provide tiers of on-demand-support, training and and other engineering services. We are presenting at several conferences this Spring, a conference in Milano in April and are in talks with Texas Instruments and will have a release at that time as well.

The world leading bluetooth beacon supplier, Polish company Estimote, already have a community of 40 000 developers and we are collaborating on creating the next level of development tools for them.

On a global scale, there is an approximate market of 2 million IoT developers in general and if Evothings reach five percent, this would result in sustainable business for their offerings – so the future is looking bright for this EIT ICT Labs start-up company.