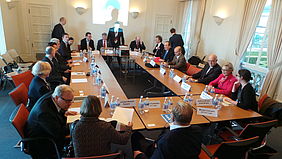 On Thursday, 13 February 2014, Peter Rothen, Consul General of Germany in San Francisco, together with Willem Jonker, CEO of EIT ICT Labs, hosted a round table meeting of Consuls General to discuss EIT ICT Labs' plans to connect the EIT ICT Labs ecosystem to the IT innovation ecosystem of the Bay Area.

The round table meeting was attended by the consuls general and/or their attachés of the 9 countries where EIT ICT Labs has its operations in Europe. Some attendees travelled from Los Angeles and Washington, DC, to attend this important event, which included diplomats from Finland, France, Germany, Great Britain, Hungary, Italy, Netherlands, Spain and Sweden. Greece attended as observer in its role as presidency of the council of the EU.

Willem Jonker introduced the EIT ICT Labs' mission and current activities across Europe and explained the motivations for reaching out to the Bay Area. The Bay Area with Silicon Valley is shaping the future of society all over the world through its highly innovative and disruptive IT ecosystem. Anders Flodström, Education Director EIT ICT Labs, presided over a discussion about how EIT ICT Labs could be best connected to the Bay Area. Several countries showed strong support, recommending their governments to support the initiative.