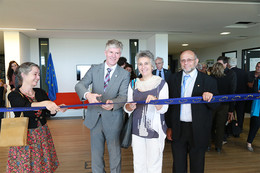 The new satellite of EIT ICT Labs in Sophia Antipolis offers ideal spaces for meetings between students, university professors, researchers, business and industrial designers in the digital domain to improve the transition from idea to product, from the laboratory to market and to transform students into entrepreneurs. It also provides temporary hosting services for researchers and students willing to mature business projects and for European SMEs wishing to establish themselves in the territory. 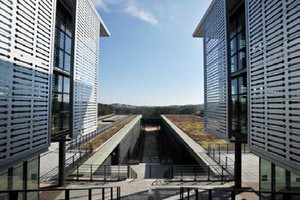 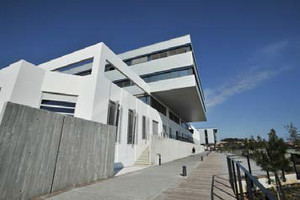 The EIT ICT Labs partners present in Sophia Antipolis to date are: the University of Nice Sophia Antipolis, INRIA, EURECOM, Orange, the SCS competitiveness cluster, Thales and SAP. On the occasion of the inauguration, ETSI, the European Telecommunications Standards Institute, and EIT ICT Labs will sign a letter of intent for the two organisations to work on common technology projects and educate future entrepreneurs to standardization as a tool for innovation.

"The new satellite in Sophia Antipolis allows EIT ICT Labs to closely connect to ICT players in the South of France. This will further strengthen our ability to boost innovation in Europe", explains Willem Jonker, CEO EIT ICT Labs.

"Sophia Antipolis Technology Park, since its creation in 1969, is playing a major role for the development of innovation in ICT in Europe, with a critical mass of international industrial actors (start-up's, SMEs and large companies) crystalized around the World Class Cluster and European Gold Label awarded SCS Competitiveness Cluster. Most of the main EIT ICT Labs' French partners have operations in Sophia Antipolis clearly aligned with some of our innovation areas (e.g., Future Cloud, Future Networking Solutions, Future Urban Life & Mobility, Privacy Security & Trust), it is then natural to materialize this with a real presence through a satellite that will accelerate both the international development of the Park and the innovation in ICT in Europe", says Stéphane Amarger, Director of EIT ICT Labs France.

From October 2014, the satellite will provide students and researchers with a program of events (developed by the EIT ICT Labs and its partners) around innovation and entrepreneurship thematics in ICT (meetings with entrepreneurs, visits of incubators, lectures, conferences, and more). A master 2 "Internet Technology and Architecture" opens in September 2014. This master in computer science includes a quarter of its courses devoted to the study of innovation processes funded by KIC EIT ICT Labs.

The Inauguration of the EIT ICT Labs' satellite in Sophia Antipolis takes place on Wednesday, May 28, 2014 from 13:00 at SophiaTech Campus - Building "Forum", 450 route des Chappes - Biot.

About Nice Sophia Antipolis University
The University of Nice Sophia Antipolis is the second comprehensive university in France. This is a research intensive university ranked in the top 3% worldwide through its 50 laboratories and collaborations with leading research organizations. It is present throughout the territory of the Alpes Maritimes with 12 campuses located from Menton to Cannes. It hosts 26,000 students in 10 faculties, 3 institutes and an engineering school. Its training has 275 degrees from bachelor to doctorate through the DUT and engineering degrees. It covers five areas of training that are law, economics and management; the arts, humanities and languages; the humanities and social sciences; science, technology and health; science and technology of physical and sporting activities. With 750 international agreements and 5,000 foreign students it is one of the most French universities included in international networks.